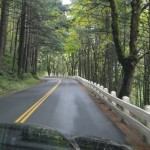 The Gorge loop is a drive that you can take on both the Oregon and Washington side of the Columbia River with more than 150 points of interest. We stayed on the Oregon side mostly because we again picked a rainy, foggy day and we just ran out of time during the day.We had again been advised to park our 5th wheel and take just our truck through the Gorge which was very good advice.The road was nicely paved but very narrow and of course in was in the foothills of the mountains so we had a lot of climbing. 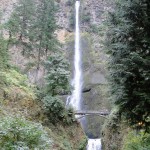 The road took us through the rain forests of Oregon and we saw spectacular waterfalls.Multnomah Falls is the most spectacular with a 620-foot drop, the second highest year-round waterfall in the U.S. A trail took us up to the half-way point where we got great pictures but the falls is so big that it’s hard to get it all in a photo.We saw so many falls and hiked so many trails.Each falls had something that made it a marvelous site.Bridal Veil Falls was a hike down to the bottom of the rain forest and everything was covered with moss.733 feet above the river in the Gorge was the Vista House at Crown Point.The circular stone building was built in 1917 as a way side re 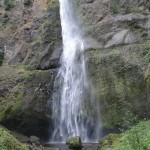 st for travelers going through the area.It was like a small fort with stain glass windows sitting on top of the world.The view was absolutely beautiful of the Columbia River.Unfortunately the day was so damp and the fog heavy it was not an ideal picture taking day.The Gorge is on our “must go back” list.

Took off for the coast but made a quick (well maybe not so quick) stop at our favorite store, Camping World, in Portland. We are trying to replace all of our lights in our RV with LED lights.We have decided to buy a few every time we go into a Camping World.They are costly so it doesn’t hurt as much doing it that way plus it gives us an excuse to stop.

From Portland we went through Astoria to Fort Stevens State Park and the Pacific Ocean. Love the Ocean!