We spent eight days in Idaho. The country we drove through was almost all farm land so we saw a lot of cows and fields; potato, grain, corn, and sugar beet fields. Sometimes you can say that farm fields are a beautiful site especially in the fall but field after field got to be just a little tiresome. 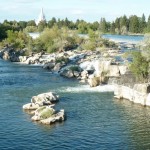 We did visit a very nice park in the center of the city of Idaho Falls which was our first stop. We didn’t find the park until the day we were going to leave which was too bad. It had a very beautiful waterfalls and a walking/ bike path that ran along the Snake River which ran through the town. 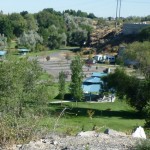 Our next stop was at Twin Falls, Idaho. Here we stayed at a County Park called Rock Creek. At first we felt a little nervous about staying at this park because there were only a couple of RVs. But it was so peaceful with Rock Creek running through the park. This was an old junkyard that the county cleaned up and made into a very nice RV Park and picnic area. There were several short walking/biking trails which we enjoyed.  We ended 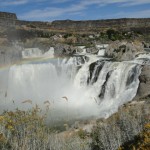 up staying a day longer than we planned just because it was so peaceful.  On the outskirts of the city a bridge went over a huge canyon where the Snake River flowed. We were able to watch 2 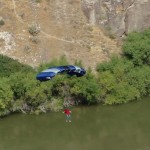 base jumpers jump from the bridge aiming for a target on the ground next to the river. It was amazing to watch! We walked a path along the rim of the canyon looking for the spot where Evil Knievel attempted to jump the canyon several years back. We 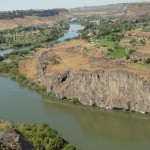 never did find the spot but had a wonderful walk. A few miles out of the city we saw the spectacular Shoshone Falls. The man at the gate was born in Alexandria, MN so we had a nice little visit with him. Then we went on a long drive to find the Thousand Springs road. Supposedly along this road springs/waterfalls just come out of the hills. To say the least it was a disappointment. We did see a few waterfalls coming out of the hillsides but in order to really see them you had to trespass on people’s property. Oh well, it was a nice day for a drive.

Our last stop in Idaho was in Meridian, a suburb of Boise. Not much to say about either Meridian or Boise. We stayed at another KOA (which I really don’t like). We were packed in like sardines on blacktop. The temperature stayed around 95 with one day hitting 100. We were happy to get out of there and hit the mountains of Oregon.

Oregon – our next stop!