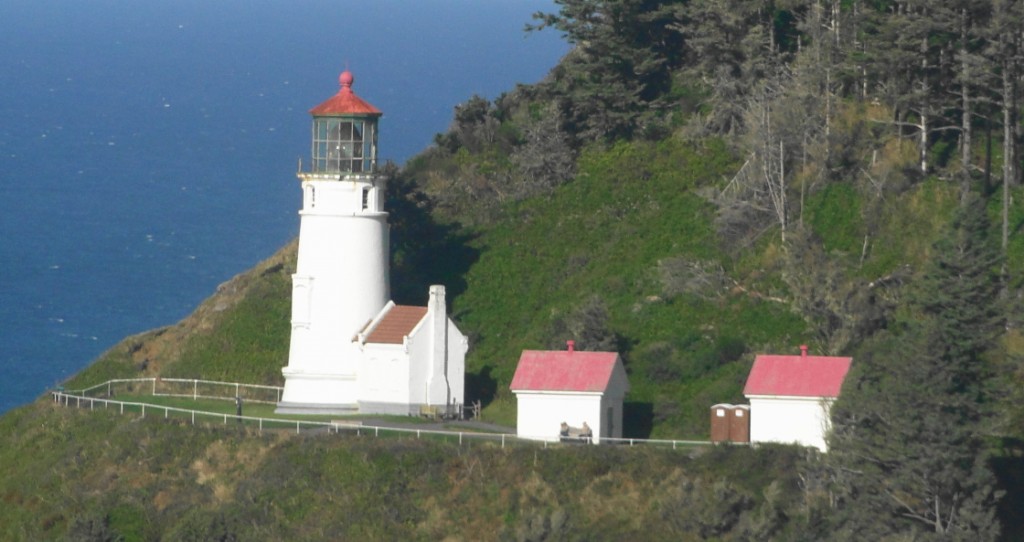 On our way to our next site we stopped at Heceta Head Lighthouse and had a nice tour. This lighthouse is going to be closed for two years to be renovated.We visited this lighthouse’s twin two days later about 40 miles farther south on the coast.The second lighthouse, Umpqua Lighthouse, was run by the Coast Guard at one time and was in much better condition than its twin.We also toured this lighthouse, 52 steps to the top, and were able to go into the lens as it was rotating.

This was an absolutely beautiful lens that was installed in the lighthouse in 1897.We were in awe of the craftsmanship and engineering that went into making this 2 ton lens which came from France.

Again our drive along the coast was breath-taking. We were able to stop several times for photos and even to take a mile hike to see Devil’s Bay.We also stopped to see the sea lions on the rocks along the shore.

Our stop for the next three nights was at Jessie M. Honeyman Memorial State Park in Florence. Most of the larger parks in Oregon are starting to close part of their parks but keep open the full hook-up sections all year.We have been surprised how busy the campgrounds have been at this time of the year and the weekends really get busy.This park was no exception.Honeyman is in the Oregon Dunes National Recreation Area so most people in the campground now are 4-wheelers going out to the sand dunes.Very nice park but probably wouldn’t go back there just because of all of the 4-wheels driving around.We stayed here only 3 nights mostly to see the lighthouses and catch-up on wash.Took a hike up one of the sand dunes to take some pictures – thought we were going to die.Great work-out!