Our plans for Christmas this year was to park our RV in Oklahoma City, rent a car and drive the 800 miles to Minnesota for a January 1st Christmas celebration with all of our kids and grandkids.  We had scheduled to pick-up the rental on the 26th, leave OKC on the 27th and get to MN on the 28th.  Things changed and we had to move our scheduled leaving date up a few days. 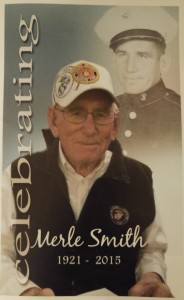 My 93 years old dad has been living in CA for the past 6 years near my sister so he could stay active and out of the cold MN winters.  He lived on his own in a condo in a senior community where he enjoyed dancing, walking, lawn bowling, and bocce ball.  He was very active up until Nov of 2014 when after having prostate cancer was diagnosed with bone cancer and had radiation treatment on a tumor on his back.  He had a hard time bouncing back from that and had a bad fall in June that took a lot out of him.  It was decided by him and us seven siblings that it was time to move him back to MN.  He moved into assisted living in Jordan, MN on Nov 12th and took another bad fall on Dec 13th which ended him in the hospital with a brain bleed.  He spent several days at HCMC in intensive care where it sounded like he was doing better since the bleeding on his brain had stopped.  I talked to him several times on the phone and although his speech was much mumbled he still asked where we were and when we would be back in MN.  On Christmas Eve day he was moved to a senior care facility for rehabilitation and Joe and I decided to take off for MN on Christmas Day so we could be with dad on his 94th birthday on Dec 26th.  Dad had another fall in the early hours of the 26th which caused the bleeding to start again.  When we arrived on the 26th he was in a semi-comatose state but recognized us for the few minutes we could wake him.  He passed away on the morning of Dec 29th; a few days passed his 94th birthday.  Dad lived a very healthy, active life and he really didn’t have any suffer at the end.   Because of the holidays and the local priest was on vacation the funeral didn’t happen until Jan 5th
.  The service at the church was hard but nothing in comparison with the grave side service.  Dad was a World War II veteran.  He was very proud to have been a Marine.  The local American Legion provided dad with an Honor Guard Ceremony, the pallbearers held the United States flag over his casket while two uniformed Marines stood at attention during the service.  When the service was over the two Marines folded the flag and made a presentation to my oldest brother.  After, the honor guard did a three shot rifle volley.  It was one of the most heart touching ceremonies I have had the privilege to witness. Many tears!

Without our kids and two little grandkids it would have been much harder.  We were so blessed to be surrounded by our family and kept busy with Cate and Alex.

Family is so important – make sure they know you love them!

Kids, Cate and Alex love you so much!