As in my last post I will say again that Joe and I have so much to be thankful for and we remind ourselves every day.  As we travelled along the gulf coast in Mississippi and Louisiana it was apparent just how fortunate we are.  Hurricane Katrina happened in 2005 and the devastation it left behind was still apparent along the gulf coast in these two states.  We stayed at Buccaneer State Park in Waveland, MS which sits right on the gulf.    Waveland was 97% destroyed in 2005.  As we drove from Waveland to the town of Bay St. Louis we were amazed at businesses that were still in ruins.  Many stilts were standing where houses use to sit on top of them.  We did a little research to look at photos of the area right after the hurricane and could not imagine what it would have been like to live through that time.  The state park we were at had been completely rebuilt.  It was an okay park but the weather (forgive me for complaining) was uncomfortably humid.  We had to run the air just to keep the inside comfortable.  If you went outside you fought off the gnats, mosquitoes and no-see-ums.  We watched new people come into the park, set-up their chairs outside, sit down to enjoy the coast view and within minutes went back inside.  Bugs were not nice.  We wondered what it would be like mid-summer.  I don’t we will ever find out. 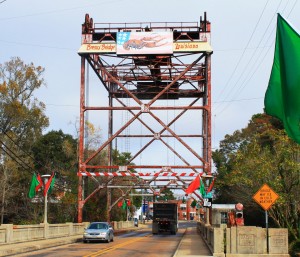 From this state park we moved on to a private park in Henderson, Louisiana.  As in so many of the private RV parks we have stayed at this park was occupied by workers who were living there permanently.  Again the humidity was terrible and by walking around the campground we could see how the humidity takes a toll on campers.  We noticed so many of the units had green mold growing on them especially on the roofs.  One day we drove into the nearest town of Breaux Bridge to see if there was anything interesting.  We had a wonderful conversation with the two women in the visitor’s center who told us it was a wonderful area to retire in.  We walked through the town, all four blocks, and just saw a lot of very old buildings and not much more and you would have to like the humidity and the biting bugs to settle here.  The area was interesting with the swamps and cypress trees.  Getting to this part of Louisiana we crossed a bridge that was about 20 miles long.  We have never seen a bridge like this.  The bridge was built over the swamps and in areas where the cypress trees were growing it was quiet beautiful. 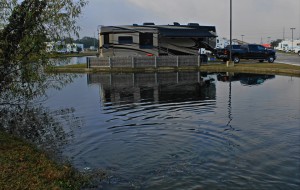 Our next stop was in Sulpher, LA at another private park where it was about 75% full of workers from the oil refinery that was very close.  The park got a rating of 10 from Good Sam.  It was a decent park but in our minds it wasn’t even close to a 10.  This was a typical park that got as many RVs into a small space with a little grass between sites.  We happened to have one of the better sites sitting on a little pond at the end of a row.  Joe and I always say it is in the eye of the beholder on what you like in an RV park and how you rate it.  This would probably get a 5 at the most for us but it worked well for us for a few days while we caught up with our wash and drove the Creole Nature Trail.  We did have another first at this park.  One morning we heard the fire department and watched as two police cars, an ambulance, and the fire department arrived across the pond from us at one of the campers.   As we watched for what seemed a long time we saw the sheriff arrive and then one by one they all left except for two sheriff’s cars.  They stood around for a long time and then we saw the coroners van pull up.  They loaded a body into the van and everyone left.  When we left the park a few days later we never saw any activity at that RV.  It made us again remind ourselves to enjoy each day because you don’t know what tomorrow brings. 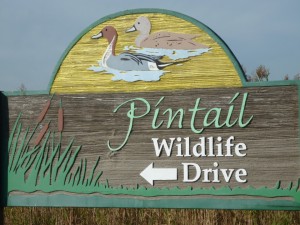 We stopped at this area of Louisiana to drive the Creole Nature Trail, called Louisiana’s Outback.  We had read an article in the Trailer Life magazine and it sounded like a wonderful drive for sights and for Joe to get some good photos.  The drive was supposedly 180 miles but we only put on 115 miles.  We left our RV in Sulpher and took off in the morning with a picnic lunch packed and cameras in the truck.  If we would be in this area again we would not drive the 115 mile loop.  Maybe a different time of the year the birds would be migrating and we would have seen more.  We stopped several times and did 2 or 3 mile walks on nature trails hoping we would see alligators or our much “wanted to see” Roseate Spoonbills  which migrate through the area.  We kept getting disappointed.  During our drive we had to cross a waterway on a short ferry ride.  Again we saw the devastation left behind from Hurricane Katrina.  So many people were living in RVs on cement slabs where their homes must have stood.  We saw some new built homes but mostly people living in some terrible conditions.  As we were driving, at times we felt depressed and counted our blessings.  There were a few communities or small towns on the 115 mile drive but most of the area was supported by the fishing industry or the oil refineries with not much else.  Getting close to the end of our drive we found Pintail Wildlife Drive, a 3 mile loop where you were suppose to stay in your vehicle so you wouldn’t disturb the migrating birds.  Of course when you have someone that wants to get those great pictures he is not going to stay in the truck.  It was the best part of our 115 mile drive.  We heard and saw thousands of migrating snow geese.  It was a spectacular sight!  We finally got to see our roseate spoonbills which we were both in awe of.  They are beautiful and unique birds because of their pink color and their spoonbill.  It was great watching them fish in the water.  Of course we saw many egrets, ibis and great blue heron.  But Joe loved the alligators.  We were told before we made the drive that we probably wouldn’t see any alligators because it was too cold.  Glad the gators didn’t hear the weather forecast.  We were not disappointed in all the gators we saw.  That last 3 mile drive was worth our day in the truck.

As we were in Sulpher, as in almost all places we stay, I went on Trip Advisor to see what was in the area and if there were any interesting places to eat.  We kept hearing about Boudin and Cracklin’.  So many grocery stores or restaurants sold “homemade” boudin.  Boudin (French/Creole/Cajun) is a sausage made of pork, onions, rice, and seasonings and sometimes they add liver.  Cracklin’ is pig skin seasoned and fried.  Sometimes there is a little meat on the skin but most time it is just fat.  So of course we were in the area and we just had to try the boudin and maybe the cracklin’.  We stopped at this little shop on the highway for a few things and talked to the owner.  We asked about where to get boudin without the liver (yuck!)  She directed us about 5 miles down the highway to a place called “The Best Stop Supermarket’ for the best boudin.   So the next day as we took off for Texas we made the stop at this little meat market/grocery store.  There was so much to pick from as far as the boudin sausage so I asked one of the people working there.  She talked us into a smoked boudin and one that was boiled.  They heated both for us so we could eat it while driving.  She also brought out a sample of the cracklin’.  I have to say the cracklin’ almost made me sick.  Fried fat it pretty gross for this northern.  Joe had a little meat on his piece but he didn’t care for it either.  I liked the boudin but it was too spicy for Joe.  I think it is like the goetta in Cincinnati (a German/American sausage), you have to acquire a taste for it.  We now have boudin in our freezer that I have to figure out how to use.  I am really glad we tried it.  It is one of the fun things about our travels getting to try different foods.  I’m a little more adventuress than Joe.  Give him a good hamburger or pizza and he is happy.

We decided to bypass New Orleans while in the area.  We were just a few short miles from the outskirts but have been told a few times that it is not a safe city.  With what is going on in the country at the present time and with those few warnings we decided to stay away from the bigger cities and continue on our way. 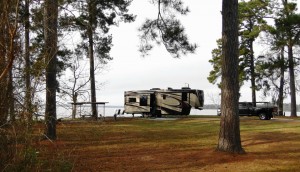 So here we are in Texas on our way to the Dallas area where we are flying out of for our Minnesota Christmas.  We are staying at a beautiful – a 10 on our rating system – Corp of Engineer Park.  We are sitting on the lake and enjoy the beautiful sunsets every night.  We were told to keep an eye on Lily because there are alligators in the lake and two dogs were killed this last summer by gators.  The park is very large and we have been able to do a lot of walking and biking.  It is so peaceful here that we have decided to stay 8 days.  Of course because we have a Senior Pass, the $9.00 a night doesn’t make it hard to stay.  The weather has been perfect and the park is almost empty.  Counting our blessings once again!

I am on a countdown until we see family over Christmas.  Some days are harder than others when it gets this close to seeing the kids and grandkids.  But before I know it, it will have come and gone.  I know we will enjoy each and every day we are with family over the holidays.

Happy Holidays to all our friends!  Stay safe over the holidays.  Get ready for hugs and kisses kids, Alex and Cate!