After leaving Ohio we decided we had the states of Missouri and Kansas to fill in our United State map so why not stay a night or two in these states on our way to Oklahoma.  We made a rule 5 years ago when we started full-timing and putting our state stickers on the United States map that in order for a sticker to be placed we must stay at least one night in that state.  It cannot be just a drive through.  We now have just the northeast states left to fill in (plus Hawaii).

Missouri was a two night stay in Higginsville in the rain and cold.  We had scheduled some warranty work on our Lifestyle in Chanute, Kansas on Dec 1st so Missouri was a quick stop.  Chanute had a city RV Park in the center of town and the first two nights were free (which was all we stayed).  Kansas RV Center did an excellent job fixing a slide issue we have been having almost since we purchased the 5th wheel 2 years ago.  Hopefully we won’t have any more issues but if we do we would try to go back to this dealer. 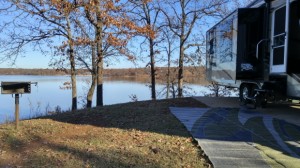 Our next stop before Oklahoma City was in Eufaula, OK at Lake Eufaula State Park where we had stayed in March of 2014.  We loved the park then and still felt the same.  Beautiful park, wonderful staff and the park was pretty much empty.  We had the same site as last time we stayed.  The site was sitting on the edge of a small hill overlooking Lake Eufaula on two sides.  We stayed here 10 nights and most days we had weather in the high 50’s to low 60’s.  We shared the park with three other campers on the opposite end that we were staying at so we felt like we had the park to ourselves.  That could be a good thing or a bad thing.  We had a scare one evening that made us look at the safety of being so far from anyone else.  It was just getting dark and someone knocked on our door.  I looked out the window and there stood a man that looked like he could have possibly been homeless.  He could see me in the window so there wasn’t an option of not opening the door.  He said he had a flat tire on his vehicle and needed a jack.  It wasn’t unusual for people to drive through the park so his story was plausible.  Joe jumped in the truck and drove to the guy’s vehicle.   After they left I realized that I didn’t have a phone number for the ranger and started to worry when Joe didn’t come back right away.   As it turned out the guy had a flat tire on a very old truck that didn’t have any lights and this guy just wanted to get the tire on and get out of there.  The next day the same truck drove past our campsite again and we decided to talk to a ranger.  We got a few emergency phone numbers from the ranger and saw him driving past our site several times a day after that.  When something like this happens we talk about what we should have done different to make sure we are safe but Joe and I want to trust everyone so we know if put in the same situation again we’d probably do the same thing.

Off to Oklahoma City for our month long stay at Twin Fountain Resort.  Why they call these places resorts is beyond me.  This “resort” has 199 sites that is wedge in between three major highways.  The noise is terrible!  The park is set-up mostly for long-term people (workers) which was why 75% of the park was full.  They charge at outrages amount of $49 per day or $44 per day if you stay a week or $650 if you stay a month.  This is why we stayed a month.  The place is relatively secure and the price was right.  We felt comfortable leaving our 5th wheel here for the two weeks we were gone back to MN.  It worked out great.

OKC is not a bad city.  It was easy to get around in and clean.  We did see a lot of pan-handlers but we are seeing more and more of that as we travel.  We were a mile away from a nice movie theater that cost only $4 for an afternoon movie so we went to several movies.  We also asked at a local grocery store for a good restaurant and were sent to Ted’s Café Escondido, an absolutely superb Mexican restaurant.

One of the things we noticed while out shopping at the local Home Depot was a portable tornado shelter that you put in your home.  It was a cylinder that you could stand in and maybe have enough room for 6 people for a short period of time.  Later when making a stop at Lowe’s we saw another shelter that was dug into the ground.  Don’t want to be in this area during tornado season although they do have tornados here in December.

They also have been experiencing earthquakes in and around OKC.  Just a few days ago they had several quakes in our area.  They keep talking about the “big one” on the news.  It is time to get out of this area.  We are heading for Texas in a few days for the remainder of the winter.  Hopefully we will find some warmer weather.  Today we are getting snow with the highs today and tomorrow supposed to be around 30 with the low overnight around 18.  Time to move on!

Note – I have to write a little note about renting a car.  Joe and I have been renting a car every once in a while in MN.  It has been nice so we decided this year to rent a car to drive back to MN for Christmas.  We reserved an SUV because we wanted 4-wheel drive for winter driving.  Next time we rent a car we have to ask a few questions.  Does the SUV have 4-wheel drive?  We thought all of them do but I guess not.  This one did not!  Is there a CD player in it?  We like to listen to books on CD while we make long drives.  This one did not!  We had bought 4 books just for this trip.  But thanks to out son-in-law, Aaron who downloaded a book for us on our phone and our son, Zach for setting-up the Bluetooth for us, we made the 13 hour straight drive back from MN to OKC a pleasant drive.  Lesson learned – don’t assume, ask questions.

As always love to all of our friends and family