We know now we are definitely moving north.  The weather has changed and we need to run our furnace or the space heater every day.  Of course, we still don’t have the snow they have back in Minnesota so we can’t complain but it is just a little different from the 70’s and 80’s we enjoyed all winter in Florida.  As we drove along the Georgia coast we went through marsh lands, large live oak tree groves with Spanish moss hanging from the branches, and many islands.

Our first stop was in the Golden Isles, a group of five islands, St. Simons Island, Sea Island, Jekyll Island, Little St. Simons Island, and Brunswick.  We stayed at a nice private campground called Coastal Georgia RV Resort.  Nice place to stay and would return or recommend the resort.  While we were there we drove to Jekyll Island to see the “Millionaires’ Village”.  The island is only 7 miles long and a few miles wide but has a fabulous historic landmark district which is called the “Millionaires Village”.   In 1886 the Jekyll Island Club Hotel was built by a Mr. Hyde as the most exclusive club in the world, with members such as J.P. Morgan, William Rockefeller and William Vanderbilt.  The hotel has been preserved as well as 33 surrounding buildings.  Presently you can stay in the hotel, eat at the beautiful restaurant, shop at the quaint little shops near the magnificent hotel or just walk the grounds.  It was a spectacular area to walk around in.  If you have a bike (which we didn’t take ours with) there is a paved bike path that goes around the entire island.   We also visited the Georgia Sea Turtle Center where several injured sea turtles were being cared for before they could be released back into the sea.  Very interesting place and we could see firsthand what our pollutants such as plastic bags do to the sea turtles.

We also went to St. Simons Island to visit the National Monument Fort Frederica built in 1742.  This was a disappointment after seeing the fort in St. Augustine.  Here we walked through an open field with a few brick foundations with markers stating what the buildings possibly had been.  I guess we can’t expect the buildings to be there after 250 years.

Little St. Simons Island was only accessible by boat and was privately owned by a resort.  We didn’t make it to Sea Island so I guess that will be for another time.  Our RV resort was on Brunswick which was a community that has seen some hard times.  The islands are on the Atlantic Intercoastal Waterway and we did see a huge cargo ship unloading Renault cars in Brunswick.  There were lots and lots full of new cars and eighteen wheelers transporting them off these lots.

From Brunswick we moved to Skidaway Island State Park outside of Savannah.  Beautiful state park with nice walking or biking trails among huge live oaks.  We decided to take a 3 mile bike trail out through the marsh and oaks.  This was a first for Joe and me.  We happen to like nice paved, preferably flat, bike trails when riding our bikes.  The sign said bike trail and it looked paved so we took it.  The paved lasted maybe 25 feet and then it was rough riding.  Narrow trails across large tree roots and up hills, something we weren’t use to riding on.  We did a lot of laughing at our poor biking skills and had a lot of fun but next time we will make sure the biking trail says “paved”.  The next day we took a 3 mile walking trail and found ourselves walking through water or mud on the trail.  Not sure which day we enjoyed more (or less).

One of our days at Skidaway we drove into Savannah about 10 miles away.  We did a city trolley tour where you could get on and off the trolley at any of 22 different stops.  Joe and I realized very quickly that is was easier for us to just walk once we had the city map than to get on and off the trolley.  You see so much more and get exercise at the same time.  One of the things Savannah has preserved is the many City Squares.  I can’t tell you how many we walked through.  Some of them had huge statues of men from their state history.  All of them were beautifully landscaped and the azaleas were blooming which made the squares even more spectacular. Some had water fountains in the center.  Joe sat on a bench in Chippewa Square where Tom Hank sat in the filming of the movie “Forrest Gump” where he said “Life is like a box of chocolates.  You never know what you get.”  Savannah has been the site where many Hollywood movies were filmed including one of our favorites “Midnight in the Garden of Good and Evil”.  Lady Chablis got his (he is a drag queen) acting debut in this film and still performs to sold out audiences in Savannah. 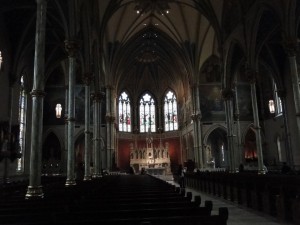 We also visited several old churches.  They are always interesting and beautiful buildings.  We had to look inside the Cathedral of St. John’s Catholic Church just because we have a St. John’s Catholic church in my home town of Jordan, MN.  Our Jordan church had this one beat for beauty.  They were actually so similar in the inside with the beautiful stain glass windows, the Stations of the Cross on the side walls but the front alter in the Jordan church far stands out above the Savannah church.  It was fun to do the comparison and the people in Jordan should realize what a treasure they have.

We saw Paula Dean’s famous Savannah restaurant called “The Lady and Sons”.  We were a little surprised because the buildings surrounding the restaurant and store where really run down.  We also took a nice walk on River Street which ran along the Savannah River and was home to several blocks of shops and restaurants.  Here was the only place we had a little bit of an uncomfortable situation happen to us.  We went into a small visitor center to use the restroom and when we came out a group of baby boomer Harley guys and gals who had way, way too much to drink at 2:00 in the afternoon were standing in the doorway blocking our way to get out of the building.  They were very loud, obnoxious and were hassling people on the street.  We hurried out of that area.  Other than that we felt as safe walking around in Savannah as we did back in Jordan.

Savannah is a beautiful old city that sits on the Savannah River and has many old historic buildings but I would still pick Charleston, SC for an old historic city to visit.

Our last day at Skidaway we visited Fort Pulaski on Cockspur Island.  The construction of this fort started in 1829 and required $1 million, 25 million bricks and took 18 years to complete.  By the time they completed the fort the artillery was obsolete.  Newer rifle cannons had been made with longer distance firing power.  The fort was easily taken over by the Union from the Confederates in a 30 hour gun battle.  The fort became a national monument in 1924 and restoration began in 1933.  We were lucky to visit on a day when of a group re-enacted a troop of Union soldiers firing a cannon.  We were told to hold our hands over our ears but it is hard to do that and take pictures at the same time.  It definitely hurt the ears when the cannon were fired but what a great experience!  The fort is surrounded by a moat so we had to cross a drawbridge to enter.   There were also many earthwork tunnels.  Earthwork is huge mounds of earth with tunnels running underground.  We were able to explore some of the tunnels that were used by the soldiers to store things such as gun powder.  It has been really interesting and fun to explore some of these old forts along the east coast.  Last year it was the lighthouses on the west coast and this year the old forts.   Both were an important part of this country’s history.

Our last stop before we left Georgia was a trip to Tybee Island for a walk on the beach.  Silly us!  It was about 45 degrees with a nasty wind.  A quick run out to the beach, took a few pictures and back to the truck where we quickly turned on the heater and the butt warmers.  Oh did that feel good!

We always appreciate every day we get to travel to enjoy our beautiful country.  One of the things we miss out on as we are travelling is being with family and friends when something bad happens.  Our dear friend John suffered a massive heart attack on Feb 14th.  John, we want you to know that you are in our thoughts daily.  We are wishing you a quick and full recovery.  Sending our love to both you and Sharon!

For all of us – each day is a gift.  Make the most of that gift!