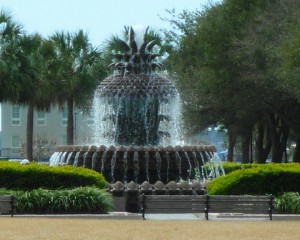 I do so love South Carolina!  This is our third visit to this state and I hope we have many more ahead of us.  Charleston was our first destination.  Our third visit to this city and we could easily come back again.  I jokingly asked Joe if we won the lottery if he would buy me a house in historic Charleston and as a true gentleman as Joe is he said “Of course!”  We both love the history in Charleston and the beauty of the historic district.  We spent two days exploring the city by touring bus, a ferry to take us to Fort Sumpter and just exploring the city for six hours on our own by walking the streets.  Charleston has done everything possible to make the streets safe and convenient for the tourists.  They have free city trolleys (which we never used but are easy assessable), a beautiful visitors center right in the historic district, it is very clean, and we always felt very safe.  People are so friendly and want you to enjoy their city.  We meet a man in one of the parks (he had a Bishon so we had to talk to him) and he told us so much history of the area and then made some suggestions of places to walk.  He also walked a little with us and just explained some of the houses.  After walking for a few hours we stopped to look at our map to see if we could find a public restroom.  A woman came up to us and asked if we were lost.  I told her we were just looking for a restroom.  She said to go to the end of the block, take a left, go into the second building and tell them that Joan said we could use their restroom.  She was a realtor and it was the building she worked in.  It’s what you hope for in any city you visit.

It was our first visit to Fort Sumpter which you had to take a half hour ferry ride to get to.  Charleston is on a peninsula with the Ashley River on one side and the Cooper River on the other and Fort Sumpter protecting the entrance to the city from the Atlantic Ocean.  Fort Sumpter is where the Civil War began on April 12, 1861.  When the civil war ended there wasn’t much left of the fort.  The fort was worked on over the years to both restore it but also to be used for defense.  The fort was used as late as World War II after Pearl Harbor was bombed.   There was also a museum at the fort that was full of history and old pictures of the way the fort had originally looked.  It was a very interesting day and on our ferry ride back to Charleston we were escorted by three dolphins guiding the ferry back to port.  Fun!

During our walk around the city on our second day we enjoyed the beautiful architect of the many styles of houses but it’s the gardens that are what draws your attention.  So many of the homes have gardens that are hidden behind wrought iron fences and gates and as you walk you hope to catch a glimpse of the garden through the fence.  Some of the homes are mansions that are a block long and some of them are what are called a “single house” because they have a side porch.  The second door on the front of the house looked like it was going into the house but it is actually a door that goes into the open porch.  These homes were built in the early 1800’s by plantation owners as summer homes even if there plantations were only ten miles out of the city.  It was cooler in the city because of the breeze coming off the Atlantic Ocean, hence the side porches.  There is so much history and beauty in Charleston that you could walk for days and not see all of it.  My favorite city by far of what we have seen in our travels.  We will be back!

Our second and last stop in South Carolina was at another place Joe and I are familiar with, Huntington Beach State Park at Murrells Inlet.  If we could describe the perfect campground Huntington Beach would be it.  The park sits right on the Atlantic Ocean with 3 miles of fabulous beach to walk, hiking trails through woods and marsh lands, paved biking trails, and campsites sitting in the woods.  What more could anyone want than a two mile hike through the woods, walking the two miles back on the beach, start a fire back at the campsite, and then sip on a glass of wine or in Joe’s case a rum and coke while listening to the birds singing in the trees that surround you.   Truly a little bit of heaven.

So here is my story about two people who are getting older and sometimes a little forgetful who are also very lucky and are thankful for their good fortunes every day.  There was a National Historic Landmark called Brookgreen Gardens about three miles from our campsite that people we had talked to said we had to see.  It opened in 1931 as an outdoor museum and sculpture garden.  It sits on about 300 acres with several walking trails and a zoo with native animals.  We were not overly impressed but neither of us are big sculpture fans.  Back to the forgetful couple.  We decided to ride our bikes to the gardens because there was a nice bike trail part of the way.  So we spent a few hours walking the trails at the gardens and it was getting late and decided it was time to head back.  As we approached our bikes one of us realized HE didn’t bring the key with to unlock the padlock on the bike chain.  Old age!  We stood there looking at the bikes like something magical would happen and then figured we needed to decide what we were going to do.  We talked about walking back to the campground but it was getting late and the park closed at 5.  We decided to check at the welcome center to see if a security person could cut the lock.  After about 30 minutes of staff calling people and one person trying his master key on the lock one of the ladies that volunteered there came out to the bikes and said a couple overheard them talking about our situation. They were camped at Huntington Beach also and the man offered to give Joe a ride back to the park to get the key and bring him back.  We were rescued!  As it turned out Bill and Sarah from Kentucky were camped two sites down from us and we ended up having several nice visits with them over the next few days.  At the end of the day Joe and I can laugh at those little things we do in life as we age but I am a believer in things happening for a reason and that day we were suppose to meet Bill and Sarah.

On our last night at Huntington we went for a bike ride to the beach.  As the sun was getting ready to set we decided to take one last trail that we hadn’t taken our bikes on.  On both sides of the trail were fresh water marshes which meant possible alligators.  We hadn’t seen any alligators except for a captured one at the gardens since we got to South Carolina and Joe was having alligator withdrawals.  As we were riding down the trail a man was standing along the side of the marsh pointing to several very active, very large alligators.  He told us it was their feeding time and that was why they were so active.  Of course that same forgetful person that forgot the key had forgotten his camera so what we witnessed next does not come with pictures.  Two very large alligators swam at each other, stopped about two feet away from each other, and just did what seemed to be a stare down for several minutes.  All of a sudden the biggest one lunged several feet in the air at the other and the second one took off toward us.  It was remarkable to see but all of a sudden we realized we couldn’t see the second alligator because it had gone under the water and we were standing about a foot above the water’s edge.  We decided we didn’t want to become dinner for the alligator and got out of there.  Joe got his alligator fix!

So we leave our perfect campground to new places in North Carolina and a visit with our daughter Cassie who is travelling to Charlotte for business.  Can’t wait to see family!

Time flies.  It’s up to you to be the navigator.   Robert Orbene