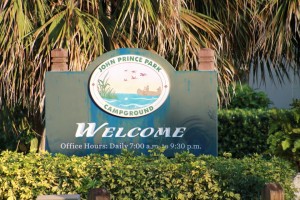 We are just wrapping up a five week stay in four of central Florida’s county parks.  Each one was different in size and beauty.  Each one was different in the people that were staying in them.  The first one was in Palm Beach County, John Prince Park, Lake Worth.  This was the largest of the four parks we stayed in.  It was 700 acres with 300 campsites and miles of paved biking & walking paths which we enjoyed daily that went around lakes and past huge oak trees full of birds.  The park was winter home to a couple of hundred snowbirds mostly French speaking Canadians.  We were put in the part of the park where people came and went.  First weekend we were there we were surrounded by families in tents with young children.  It was very entertaining to watch the family fun.  One mom apologized for all the noise her three little kids were making but it really wasn’t noise at all.  It was kids having a lot of outdoor fun.  They were a lot friendlier than most people in the park.  We couldn’t decide if we perceived the people to be unfriendly because they didn’t speak English or if they just were unfriendly.  Nice park, nice site looking out at the lake but we were happy to leave. 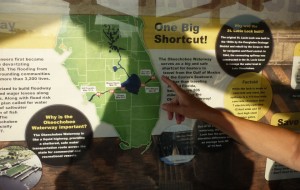 Our next county park was in Martin County in Stuarts, FL at Phipps Park.  There were about 50 sites but only 16 sites that had water/electric hook-ups. We stayed the first two nights without electric hook-up but moved to a water/electric site for the remainder of our stay.  Both of our sites at this park were right on the Okeechobee Waterway with spectacular views of the boats ranging from kayaks, to small fishing boats, to middle size family boats to large yachts going through the lock.  We watched the bald eagles and ospreys fishing for their dinner and hundreds of vultures sitting in the trees.  The vultures were a little scary at times and they are truly an ugly bird.  Sites were set-up a little different but had a lot of room.  It was easily a place that you could bike or take a nice walk right outside of the park.  We would definitely return to this park.  They allowed snowbirds to stay up to 180 days but very few long term people there.  Most snowbirds don’t like it when they have to park on grass/dirt.  This is never an issue for us.  We’ll take the dirt or grass instead of being parked on top of your neighbor.

Brevard County, Melbourne’s Wickham Park was our third county park we stayed in.  This was a 500 acre park with a busy Frisbee golf course, a very large senior center, championship horseshoe courts, horse stables and arenas and a large picnic area.   Not a park for walking or biking because of the traffic.  They had around 100 campsites but they allowed the snowbirds to set-up their RVs any way they wanted on the sites.  It made for a very interesting campground.  They put us between two snowbirders and on one side we walked out into our neighbor’s outside sitting area.  As it so happened the nice couple, Carolyn and Harold from Virginia, a couple 80 yrs old, loved to visit so they sat outside and waited for us to open up our door.  Not much got by them.  They knew our Ivy was sick and they knew the day we said our good-byes to her.  They wanted us to come over and play cards to get our minds off of her but Joe and I were not fit company for anyone.  Truly a lovely couple.

After saying good-bye to our Ivy we decided we had to keep ourselves busy but also wanted to stay away from home where she had been such a big part of our lives so we found things to do each day.  We were only about 3 miles from the ocean so one day we walked the beach for a couple of hours, watched the fisherman fishing in the surf, and found a cute little pizza place for Joe to have his favorite meal.  It was a good day to reminisce about our two dogs. 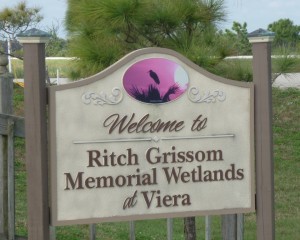 One day we went to Ritch Grissom Wetlands to bird watch. What a fantastic place!  Here you could stay in your car and just drive around the many roads that went through the wetlands or you could get out anywhere along the way and walk or just stand and watch birds.  As Joe was taking pictures one of the volunteers approached us and started talking about the bird life in these wetlands.  One thing leads to another and pretty soon he invited Joe to put his 400mm lens on Joe’s camera and told Joe to go for it – shoot pictures.  Joe loved it but realized this lens and the lens he already has it not that much different.  One is just a bit bigger to handle but it was fun for Joe and very nice of the volunteer. We spent nearly an hour with the volunteer and he shared pictures he had taken at the wetlands and so much information.  Another great day and it was free and nature which is always the best of days.  We also spent a day at Kennedy Space Center, which isn’t free by far but very enjoyable.  We didn’t allow ourselves enough time and would highly recommend being there when it opens in the morning.  Just taking the bus tour is 2 hrs long and you would miss so much if you didn’t take this tour.  There were several movies you could watch but we had time for only one in the IMAX Theater.  It was a nice day and worth the cost.

It was hard for us to leave Wickham Park just because this was the last place we were with our Ivy.  We would maybe return here but it wouldn’t be on the top of our list.  The one nice thing was that it was close to the ocean. 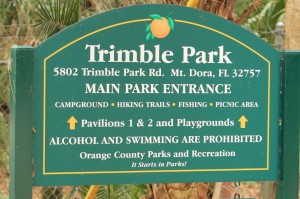 The true winner of the four county parks that we stayed at was a small 15 site park in Orange County in the beautiful town of Mount Dora, Trimble Park.  We made reservations for a week and extended our stay for 4 more nights and would have stayed longer if they would have had openings.  There is no way I can describe the park because you wouldn’t be able to hear the sounds and the bird sounds were as much a part of the park as the visual sites of the trees, the lake, the boardwalk and nature trails as well as the campsites.  This was one of the best parks we have stayed in.  It had everything that Joe and I love; our site sat right on the lake, we were surrounded by large oak and palm trees, no traffic noise only birds, campfires, wonderful staff, and we met the nicest people.  Next to us for our 11 day stay was a wonderful couple from New Hampshire, Doug and Joan, who have been full-timing for 10 years.   It is so great to be able to visit with someone that has been full-timing for that length of time because they have so much knowledge that we can gain from.  We have met a lot of full-timers on the road but most of them don’t move as often as Joe and I do.  Doug and Joan don’t stay in one place very long either.  They gave us a spreadsheet of the places they have stayed at for the last several years which I’m sure we will be using down the road.

While we were at Trimble Park Joe took so many pictures.  One of his favorite subjects was a very large 12 ft alligator who came out to sun every day with many babies.  One day we counted 8 young alligators staying close to her.  We loved checking on her sometimes more than once a day.  We also saw bald eagles, osprey, many other Florida birds but my favorite was the female cardinal that fell in love with our truck.  She would spend hours pecking on the side mirrors or the side or back windows.  We started covering the mirrors but she still loved the windows.  We washed the truck one day and within minutes of coming back she already had deposited her droppings down the side of the truck as she pecked on the window.  Cardinals have always held a special place in my heart because of my mom so I didn’t mind her at all.

Orange County has 5 parks to camp in so we went one day to check out another of the parks.  Kelly Park has about forty some sites and there were 2 RVs in the park.  Don’t know why it isn’t used more except that they only allow a 14 day stay in all of their parks before they make you leave and most snowbirds don’t want to do that.  Good for those of us that move often.  We will definitely stay in this park again if we come back to Florida.  The park has it all!

Sadly we move on to private campgrounds where we are normally packed in and no birds singing in the morning to wake us up.  We’ll survive because every new area is an adventure and we want to explore it all!

Love to all and stay happy!