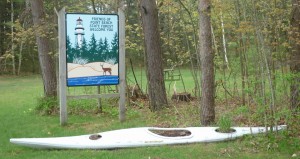 On our way from Wisconsin to Ohio we were lucky enough to stay in three nice state parks in three different states.  Our first and my favorite was at Two Rivers, WI on the shores of Lake Michigan, Point Beach State Forest. Each of these three state parks had biking trails so we did a lot of biking but Point Beach by far was the most challenging for Joe and I.  There were 6 miles of hard packed gravel trails going through thick forests winding up and down very hilly terrain.  This trail took us into the town of Two Rivers and if we would have followed a paved path along the shores of Lake Michigan for another 6 miles we could have ridden to the next town.  Joe and I know what our capacity is on our bikes and we know it’s not a 24 mile ride round trip from our campsite and back.  We rode almost the entire gravel part of the trail and were happy to get back to the 5th wheel.  The trail itself was spectacular.  No sounds except for the birds in the trees and the sound of our tires over the gravel.  We came across an old hunters cabin that was built in the early 1900’s and had been restored by the park.  It was a nice place for a rest stop and a little water break.  We were also able to walk on the beach of Lake Michigan even though it was foggy almost the entire time we were there and at times it was hard to see the lake. A lighthouse still being used by the Coast Guard sat on the shore in the park.  The campsites were so spaced out and each was surrounded by vegetation.  The park was quiet during the week but was booked full for the weekend.  We would love to go back and spend a little more time and just maybe we could make that 24 mile bike trip.

Our next stop was in Zion, IL not to far out of Chicago called Illinois Beach State Park.  Again this park sat on the shores of Lake Michigan and had a bike trail that went through the south park, through the town of Zion, and finally connected to the north park.  A decommissioned Nuclear Plant sat on the shore of Lake Michigan between the south and north sides of the park.  It was a little eerie to know there was tons of nuclear waste in containers just sitting there with armed guards watching 24 hours a day.  The bike trail was by far not as nice as the first. The park needed a lot of work and the sites were unlevel.  It was a huge park with over 200 sites spaced again nicely apart but no vegetation between sites.  We walked the park several times and decided it was easily a couple mile walk from one end of the campsites to the other end and that didn’t included going to the north park.  Going from the south park to the north park was a 7 mile ride/walk.  This park wouldn’t be on our must return list for several reasons.  The biggest reason would be the unlevel sites but it also put us to close to Chicago and we were forced to drive through Chicago to get over to Indiana and then Ohio.

We thought we would drive through Chicago  early Sunday afternoon thinking there wouldn’t be as much traffic as waiting for Monday.  The traffic was tolerable but paying the tolls was another thing.  The first toll cost us $16.80 with the following two costing us $4.00 and $1.60.  Ouch!  We think that the first one was a mistake made by the young man in the toll booth.  The sign said $4.00 for 2 axles and we are 4 axles.  We couldn’t figure out how he came up with the $16.80 but we paid it and moved on with a little bit of complaining (ok a lot of complaining).

Our last stop before we hit Ohio was at West Lafayette, IN at Prophetstown State Park, Indiana’s newest state park.  This park has only been in existence for 8 years.  Beautiful prairie lands which is so different from what we are use to staying in at state parks.  Part of the campground sat in the trees with nicely placed vegetation or trees in between sites.  The other part of the campground was sitting on the edge of the meadows.  It might get a little hot on those sites during the summer but the meadows were beautiful.  This park also had nice paved bike trails within the park where we rode to Historic Prophetstown, an early 1900’s farm that had been rebuilt to show what farming was like at the turn of the century.  We watched the draft horses out in the field and toured the farm house that was a top of the line house that was ordered from a Sears catalog.   Of course this house was a replica but the original house was order from a catalog and everything on the house had to be assembled.  We walked through the outbuildings; barn, chicken coop, and a few other buildings.  Wasn’t much different from what I grew up on or Joe spending his younger summer years at helping his uncles.  We might have had tractors instead of horses but everything else looked the same.

We rode our bikes on the path through the meadows and enjoyed stopping to snap pictures of the many wild flowers in bloom.  We had a nice visit with a young woman, maybe in her mid to late twenties, who was traveling by herself and her dog staying at state parks in her tent.  She was quite an adventurist.  She had stayed in woods in Pennsylvania where black bears were seen often.  She said she never felt afraid in her travels.  She was interviewing at Purdue in Lafayette for an agriculture researcher and was hoping she could get a little more traveling in before started her next job.  Interesting people we meet!  This park would definitely be on our “like to return” list.  Nice area, out in the country with no city noises only the birds and the coyotes.

We arrived on a Tuesday afternoon in Ohio, picked up Hope, the Great Dane, after Zach and Lauren got off work, watched them pack and leave and now we have the ‘big one’ for 5 days.  We ask ourselves what our kids do to get such well behaved dogs.  Other than Hope’s size we don’t even know she is in the 5th wheel.   We do know that we don’t want a big dog if we ever get another dog just for the simple reason that we don’t have enough space.  Ok ask the question – which would I rather watch? Cate or Hope?   Sorry Zach but I don’t even have to think about that answer.  We love them all but just differently.  Cate can give us hugs and kisses and Hope – yuck kisses!

93 containers were delivered from IKEA for Zach’s kitchen on Wednesday.  OMG!  Where do you start?

Stay safe!  Find joy in everything you do!  Love to all!