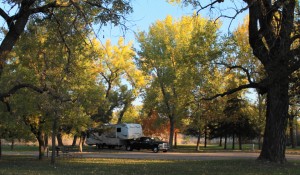 We decided to travel Hwy 80 from Iowa to California.  Because of the time of the year we wanted to get as far south as we could before we ran into bad weather.  We stayed one night in Iowa and hit the road to Nebraska.   There we stayed two nights at a lovely State Park, Mormon Island, in Doniphan, NE, right off Hwy 80.  It was very quiet even being relatively close to the highway and very few campers in the park.  We stayed one night at a Cabela’s RV Park in Sidney, NE.  The park was okay.  This is where Cabela’s started and where they have their headquarters.   The thing about staying in a park like this is that there is no security and it sits close to the highway and in a town.  To many people drive through these parks just to see who is there.  Some parks you feel comfortable leaving your grill and chairs out at night and parks like this you want to make sure everything is locked up.

We decided to move every day or two which we don’t normally do but the weather was getting chilly and we had driven through a little snow so we made our stays short.   Our next stop was at Rawlins, WY.   We stayed in a campground where almost all the campers were people working in the area.   We don’t know how they survive the winter weather but we could see that most of them had been there for some time.  Glad to move on. 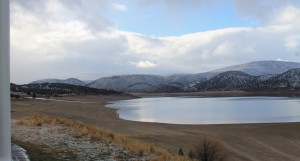 Utah was our next stop.  First stop was at beautiful Rockport State Park where the father and son capsized their canoe.  We would love to go back to this area.  Beauty everywhere you looked.  From there we stayed in Salt Lake City for two nights at a way to expensive KOA but we needed to do wash and the truck had a warning light on that we needed to get checked at a Dodge dealer which was a quick fix under warranty.  We drove to see temple square but could have walked or taken our bikes since it was only 2 miles from where we were staying.  No pictures because we forgot the camera.

Nevada was our next destination.  We’ve driven to CA on Hwy 80 a few times and remembered each of these states, Iowa, Nebraska, Utah, and Nevada as being pretty boring drives but this time we looked at the beauty of the countryside a different way.  Every state has a beauty about it and every state has some boredom about it.  We just have to remember to see the beauty in it all.  We were not looking forward to the drive through Nevada but forgot about the mountains and the antelope that were in the fields along the highway.  Nevada seems to be a very depressed state.  We remember going through it two years ago and there were so many businesses closed, houses boarded up, and not much to the towns as we drove through them.  It hasn’t got any better.  Our first night we stayed in a park on the outskirts of Elko.  The park was made up of full-time gold mine workers. Industrial gold mining in this area is big business.  The gold mine RV parks here are like the oil field RV parks of North Dakota.  There are RV parks all over with workers from all over the country.  One of the workers in the park told us that to rent an apartment in the town of Elko was over $2000 a month.  He pays $300 a month to put an RV in the park.  Of course there was the matter of staying warm over winter. Because of being in higher elevations they get snow and it does get very cold.  Here was another place we were happy to leave.  Not so much because of where it was but because of who was in the park.  We saw to many families with little kids crammed into small travel trailers trying to make it.  The kids had no place to play except on the gravel roads in the park.  But the most interesting thing about this park was that it had a good size bar in the center of it.  We happened to stay on a Friday and the parking lot for the bar was very busy.  Not much else to do around the area I guess.

From here we moved on to Verdi, NV. a small town about 10 miles out of Reno.  A very nice RV park with a restaurant, gas station, laundry and small store.  The surroundings were beautiful and we hiked into the hills and every day we had mule deer walk through the park.  We ended up staying a week just because the weather was so nice and we enjoyed the view. 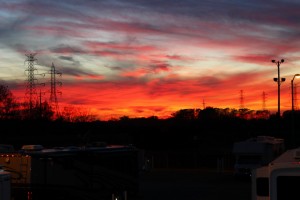 It was time to drive out of the Sierra Mountains and into Sacramento, CA.  We had decided to stay at CAL Expo, part of the state fairgrounds.  Everything in CA is so expensive so we always look for something that sounds decent but at the same time doesn’t cost us our life savings.  We have stayed at several state fairgrounds and they are all about the same.  No frills but adequate.  This was the same.  They had around 400 sites but maybe 40 RVs in the park.  The park was surrounded by fencing with barbwire on the top and security drove through often.  There were also camp hosts on site that kept the homeless out.   A couple of nice things about the park was that it had a laundry, although we didn’t use it, they had a nice

off lease dog park, shopping for everything was very close, and the Great River Bike and Hiking trail ran right outside of the park so we got in both biking and walking on the trail.  The bad thing was all of the homeless people within a few blocks of the park.  It was more than depressing to drive out of the park.  As we have travelled across the country we have many times seen people standing on street corners with their signs asking for help.  This time we saw pregnant women and so many old people, both men and women begging.  It was also different because of so many homeless people sleeping along shopping centers or under trees next to the sidewalks.    Our first encounter was going out for dinner the first night and as we were looking for a parking space in the back of the restaurant we noticed tents and tarps in a corner of the parking lot.  A better look told us that there were people living in those tents and tarps.  We decided to move on but noticed more and more individuals pushing shopping carts with their life belongings in them.  At the Safeway grocery store we saw a person sleeping under the bushes with all his bags of stuff.  One day we came out of Walgreens and were stopped by a man carrying a little boy about three.  He told us this story about how his car was towed because it had expired tabs and he had no money to take the bus home and no one to call for help.    We were quite sure he was on drugs but the little boy was too much for either Joe or I.  We gave him money and silently went back to our truck and just sat there.  We realize how fortunate we are, how fortunate our children are and now our grandbabies.  But you also wonder how these individuals got into this situation and how they will be able to get out of it.  It is more than one can comprehend.  I truly hate to say this but after staying ten days in this park I was so ready to leave.  The saying “out of site out of mind” might work but the look in the little boy’s eyes will stay with Joe and me for awhile. 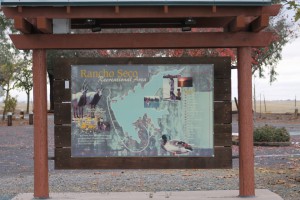 After the hustle of the big city we decided to try the country.  We found a nice little park about 20 miles off Hwy 80 in Herald, CA.   Nothing close, no security lights overhead, no homeless people just us and another camper, the camp host, a few Canadian geese, a little lake, and a decommissioned Nuclear Plant.  Maybe that is why it is so far away from everything.  Also in the park is the Amanda Blake Wildlife Preserve.  For those as old as Joe and I, Amanda Blake played Kitty on the TV show “Gunsmoke”.  The preserve is not open at this time of the year but we catch a glimpse of the Ostrich, Emus, Giant Eland, and African Antelope out in the plains next to the campground.  It is peaceful where we are parked right now.  We plan on staying here for a week and our next stop will be to see my dad.  We will be in Pleasanton, CA on the 24th of November.  We look forward to spending time with him and he has gotten the ok from his doctor to fly back to MN with us for Christmas so that will be great.

As Joe and I travel we talk often about all the good things in our lives that we are so grateful for.  We also talk about not knowing what tomorrow will bring and again to be thankful for each day we’ve been given together.  We are very, very lucky because not only do we have wonderful children but we also think we have worked hard and lived a pretty simple life and have been given the opportunity to fulfill this dream of ours.

As always, stay safe!  Love those close to you but also love those not so fortunate especially around the holidays.