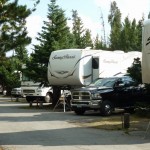 We spent four days in Yellowstone and three days in the Grand Teton. We wish we would have spent more time in Yellowstone and less time in the Tetons.We were told that we picked such a good time of the year to visit these two parks because supposedly after Labor Day it was less busy.Boy was that wrong!Both parks were very busy.We stayed in Fishing Bridge RV Park in Yellowstone at the east entrance and it was full every night.There were several campgrounds that were already closed for the season.The roadways were also very busy.

The last time we were in Yellowstone was about 38 years ago. We didn’t remember a lot except of course for Old Faithful which hadn’t changed.Maybe age makes you appreciate the beauty of the park because we sure didn’t remember the spectacular scenery. 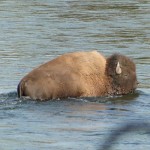 We meet so many people before we entered the park that said they were so disappointed because they didn’t see any animals while in the park. They must not have driven through Hayden Valley.We were on this road several times and each time we saw herds of buffalo both in the valley and also crossing the road.You could sit in your car or stand out in the road if you were brave enough and have the buffalo cross just feet from the car.We have so many pictures of the buffalo.We once stopped to sit by Yellowstone River and a huge bull buffalo swam across the river.It was an awesome site!We also saw a wolf, a bull elk and his harem, mule deer, and osprey.We saw everything but a bear and I guess that was okay. 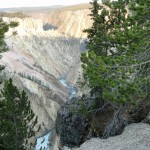 We discovered that if you just drove the 144 miles around the park without getting out of your car you would have missed so many spectacular sites. Most of the drive was beautiful but you needed to get out of your car to see the true beauty of the park.The last time we were at Yellowstone we remember the lower and upper falls but never took the time to walk to see them.This time we tried to see as much as we could.Artist Point was a short walk to see a marvelous view of the lower falls.What an astonishing site!The 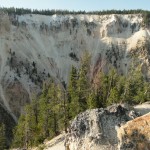 view of the waterfalls was breathtaking.We were fortunate to be there just as the sun was setting.It made the view more spectacular.The next day one of our stops was at the Grand Canyon of Yellowstone.We have yet to go to the Grand Canyon in Arizona so I can’t compare the two but this Grand Canyon in Yellowstone was incredible.The colors in the rock walls were brilliant with layers of reds, oranges, greens and blues.As we walked along the south rim every few yards was a picture perfect spot and the north rim was just as magnificent.This is a must see. 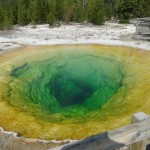 Of course we walked through the geysers which are all different and one is more dazzling than the next. Most of the west side of the park you can walk through large areas of geysers along boardwalks.This is where we ran out of time.We got so tired from walking and didn’t go back the next day.We definitely will return to Yellowstone.

From Yellowstone we went to the Grand

Teton National Park. We stayed at Colter Bay Campground which had no hook-ups.This was nicer campground than Yellowstone just because you had a little space between RVs and you had a picnic table and could have a fire, which Yellowstone did not allow.In all honesty, neither Joe nor I found Grand Teton exciting.The mountains are beautiful to look at and with Jackson Lake right up against the mountains it is quiet a view.But the park is small with only a 44 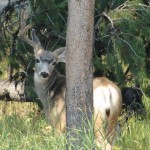 mile loop going through it and really the only thing to see in the park is the Teton Mountain Range.There just wasn’t the diversity in landscape that you saw in Yellowstone.Maybe if we would have gone to the Tetons first we would have seen the park differently.We are truly glad we did visit the park but it is not a must go back for us. 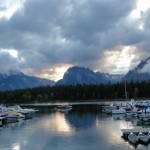 The highlight of our stay was an evening boat cruise on Lake Jackson with Captain Bret and First Mate Les. We went out about 5:30 and spent around an hour and a half going out to the base of Mt. Moran.It was spectacular!We learned a lot of history from Les and were able to watch a mule deer with her two fawns on a shoreline.Captain Bret took us to a spot to watch a pair of adult bald eagles with a young one in the nest.It was fun to watch.

The following morning we left the park for Idaho. The drive from Jackson, WY to Idaho Falls was a magnificent drive.The Snake River followed the road through canyons and valleys.We stopped alone the river to camp but decided we needed a night or two of electricity so found our way to Idaho Falls and a nice RV park.

Off we go to explore Idaho!