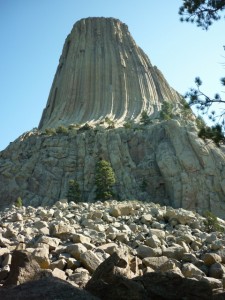 Devils Tower and Keystone State Park We decided to stay a few days at Devils Tower, WY at a KOA with Devils Tower as a backdrop.I do not like KOAs.Too expensive for what it is but it was close to where we wanted to be.We went into Devils Tower National Monument Park and found out we could have camped there.Missed a great opportunity.We hiked the perimeter of the Tower which was 1.3 miles but took us over an hour.The Tower is so beautiful and as you go around it the face changes.It was very crowded with a lot of tourists.Again it was a very hot day and we were very glad we had taken the hike in the morning. Tragedy had hit the KOA owners the week before we came.The campground was owned by a single older woman and her son had come to help her for awhile.A sewer truck had come to empty the septic system and while the truck owner was doing his job, part of the ground gave way and the man fell in the septic system.The owner’s son jumped in to help the guy and both men died because of the gas fumes. It makes you think that you have to live your life to the fullest because you never know what tomorrow brings.

Keystone State Park – We found a real gem of a state park. We were just trying to find someplace to stay for three nights before we had to be in Gillette and because the weather was so terribly hot we opted for Empire Guesthouse & RV Park in Pine Haven, WY.It had full hook-ups so we could run the air but this place didn’t offer much else.Our spot was big enough for our RV with the next RV an arm’s length away.Owners were very nice but not a “must stay” place.On our second day there we decided to take a drive and came across Keystone State Park about 5 miles away from where we were parked.Keystone has several campgrounds and there were hardly anyone in the campgrounds.We found this beautiful site in Homestead Campground within the park and decided we needed to move.So the next morning we unplugged from the air-conditioning and moved to this site over-looking the lake.We had no hook-ups which meant no air-conditioning in 100 degree temperature but it was so worth the serenity of the spot.We were able to stay under the shade and take several dips in the lake.There was only one other RV in that campground and we couldn’t see it from our spot.I could have gone skinny dipping in the lake and no one would have known but the fish.But that wouldn’t have been fair to the fish so I thought better of it.That night it cooled down so much that we had to close the windows.
We would definitely go back there if we were in the area.

Off to Gillette, WY and our Escapade Rally!