We heard about this Ghost Town close to the CA/ Arizona border and decided to take the 240 mile trip back to Western Arizona to see it.  On the way we stayed two nights in the “Cowboy” town of Wickenburg.  Usually we do a little research before we start off to find our next possibly campsite but we had heard that the BLM land (Bureau of Land Management) in the desert was nice so we decided to check that out in Wickenburg.  On our way into town we stopped at an antique store and asked where the BLM land was.  After getting directions from a local and with the 5th wheel in tow off we went to find our next campsite.  Just a few miles out of Wickenburg we started to see RVs camped in the desert.  With Joe and I being novices at boondocking we weren’t sure where we could go and the cost.  We drove about 10 miles out of town into the desert and decided to go back into town and find a regular RV park (big chickens).

I’ll just say a little about the park we stayed in because we have never stayed in one like it.  It was called West Park and it is what I would consider a “high-end” 55 and over mobile home park.  Very beautiful mobile home park that was excellently maintained with only about 25 RV spots and most of them were occupied by snow birds.  We decided to stay two nights and asked about the cost.  We were told $61 a night.  Wow!  After talking to the extremely helpful woman behind the counter we decided it was just to much and left.  While maneuvering the 5th wheel out of their office area the woman came running out and asked if we would stay if they charged us $40 a night.  It was still over our budget but we wanted to stay in the area so we paid up and parked the rig.  We were told the reason they charge the $61 is to discourage the overnighters from staying because they don’t have many spaces available.  That would work! 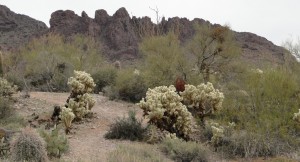 Weather was hot so we got up early the next morning and drove back out to the BLM land for a hike.  We found a great trail about 8 miles out that went to Vultures Peak, about a 2 mile hike up a mountain.  With the hot weather and taking Ivy with us we made it about three-quarters of the way and decided to turn around.   Some of the desert cactus were about to bloom.  We’ve seen a few cacti blooming but would love to see the desert in bloom. 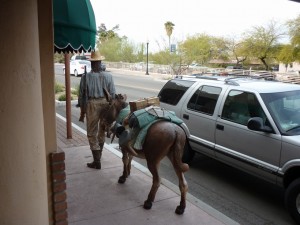 The town of Wickenburg is small and almost everything closes down at 5:00.  We did a self-walking tour so we could see all of the realistic cowboy sculptures in the town.  We saw some unbelievable sculptures like the Cowboy and Dance Hall Girl, Miner Leading Donkey, and the best was Felon & Jail Tree.  In the gold mining days everyone was to busy looking for gold to build a jail.  Instead when a crime was committed the offender was chained to a large tree in the center of the town.  The sculpture looked like a real man chained to the tree.  Very cool to see!

From Wickenburg we drove west to Kingman on Hwy 93.  I only mention the highway because in this part of the desert we were able to see our first Joshua Trees.  They a very scraggly looking desert tree but when they bloom it’s suppose to be spectacular.  To bad we didn’t see them blooming but seeing all of these unusual trees was a desert treat.  At Kingman we stayed at Fort Beale’s RV Park right off of Historic Route 66.  It was great taking a drive around Kingman on Route 66.  We had a burger one night at Mr. D’s restaurant on Route 66.  Great food and great 50’s ambiance.  A drive 28 miles 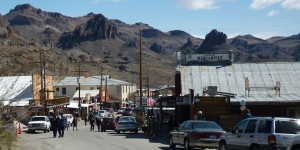 on Route 66 from Kingman took us to the gold mine town of Oatman that we drove that 240 miles back west for.  It was worth the trip!  Oatman was born in 1906 as a tent camp that flourished as a gold mining town.  It thrived until 1942.  About 50 people now live in this town and they entertain about 500,000 visitors every year.  What draws the visitors?  I think it’s the wild burros that wander Main Street.  Oh there are the small touristy shops and the daily gun fight on Main Street but nothing gets the attention of the visitors more than the burros.  If you were told before you made the trip to Oatman you might bring along a bag of carrots or like we did, a bag of sliced apples, to feed the burros.  Or you can buy a little bag of food for $1.  But whatever you feed them they enjoy eating.  It was a lot of fun.  We also saw burros on the road as we drove to Oatman.   We enjoyed a late lunch at the old Oatman Hotel where Clark Gable and Carol Lombard spent their wedding night.  We were entertained as we ate by a cowboy playing his guitar and singing old country songs.  He was excellent and added just one more thing to a fun filled day. 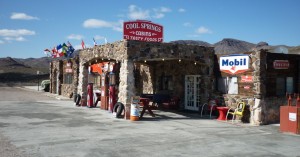 As we drove back to Kingman we stopped at the Cool Springs Station on Route 66.  When Route 66 was a main highway this little station was the place to stop between Oatman and Kingman.  When highways took the place of Route 66 this little station fell to ruins.   It was rebuilt in 2002 by a man from Chicago and is now a gift shop and museum manage by a man who moved to Arizona from Alexandria, Minnesota.  We had a great history lesson and a nice visit with this fellow Minnesotan.

While in Kingman, we also did a couple of other day trips.  One colder day we drove to Hoover Dam, about a 70 mile one way trip.  Our intentions were to take an hour tour of the dam but we were informed as we tried to park that since we were on Federal land we couldn’t leave Ivy in our vehicle by herself.  The parking attendant told us we had two options – one of us could stay with Ivy while the other did the tour and then switch or we could park on the Arizona side (we were on the Nevada side) and take our chances of leaving Ivy in the truck.  We decided to move to the Arizona side, park, skip the tour and just go look at the dam.  It worked out ok.  We did learn another lesson, check those things out before we go.    Another day we drove 14 miles out of Kingman to Hualapai Mountain County Park and took a hike into the mountain.  Here we hiked through some snow while climbing up the mountain which was different than hiking in the desert.  Beautiful County Park with a nice campground but not one that we could bring our 5th wheel into.

Kingman was a nice area but because it was a little farther north the weather was a little chiller and we decided we wanted some warm weather so we decided to go a little south and moved to Lake Havasu City which was right on the boarder of Arizona and California.  Loved the area and we found a campground on Lake Havasu.  Crazy Horse Campground was a huge RV Park where the RVs were packed in but we had wonderful neighbors all around us and we were very close to the lake which was different with all the desert camping we had done.  We were still in the desert but we just had this lake to enjoy.  We also were a stone’s throw from the town on Lake Havasu and a wonderful four mile loop walking/biking trail.  We had beautiful warm weather and about a thousand spring breakers.  It was a town hopping with bikini clad young woman and partying young men.  Every night the town put on music entertainment for these college kids from 9:00 until 2:00 in the morning.  We ended up pulling our bedroom slide-out in at night to cut down on the noise.  They were just having fun and so were we.  Lake Havasu is also home to London Bridge, a bridge that was bought from England and brought over and put back together brick by brick.  It was an interesting fact about this lovely city.

When we got to Lake Havasu City Joe noticed part of our bike rack broke leaving one of the bikes unsafely mounted on the rack.  He thought about trying to order the part but we really didn’t want to wait for it to be shipped to us.  So we asked at the visitor’s center if they knew someone who could weld the part for us.  The woman at the visitor’s center made a quick call and sent us to B & S Truck Repair.  It is so great to know that there are people out in this big country of ours that are so generous with their time.  Not only did B & S Truck Repair immediately weld the part but they didn’t charge us.  Thank you B & S Truck and Lake Havasu City’s Visitor Center!  We appreciated your help.

We are off to the northern part of Arizona to see the Grand Canyon and Sedona.  Snow is predicted for the high country which means we most likely will get some snow.  We can handle it after all we are Minnesotans.