People ask us all the time what we don’t like about RV full-timing.  I’ve voiced my dislike for laundromats.  I’d now have to add finding a dog groomer to my dislikes.  We never realized how wonderful it was to take our dogs to the same groomer for the past 14 years and she just knew how we liked the dogs groomed.  We have tried Petsmart and a private groomer in Oregon and they were so-so.  But we found this woman in Apache Junction who took the prize.  She was recommended by the KOA where we stayed.    We took in Ivy, a 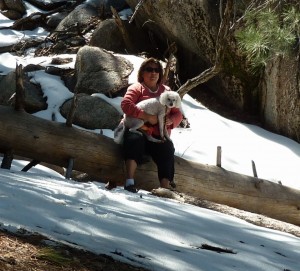 Bichon, and picked up Ivy, a Poodle.  When I dropped Ivy off the woman asked how I wanted her groomed.  I went over everything but she had other ideas.  When we went back to pick Ivy up 4 ½ hrs later Ivy had a poodle cut.  The woman told me that no way Ivy was a Bichon.  According to her Ivy had to long of legs and her paws were that of a poodle.  I assured her that we had the paperwork stating she was a Bichon but she insisted she knew her dogs and Ivy was no Bichon.  I guess she took it on herself to show us that Ivy was actually a Poodle.  I could have cried.  Ivy has no hair except on the end of her tail and her ears and a little on her face.  Joe assures me that it will grow back.  She told me she would keep my name on file so if we come back in the area she would have Ivy’s information.  WHAT?  No way would I take a dog to that crazy lady.  Finding a place to groom a dog is almost as hard as finding a place to get my hair cut.  Good thing I can tell a hairdresser that I don’t want a poodle cut!

No pictures – too embarrassing for Ivy!