Ok, I’ll have to take back some of my concerns about the desert.  There is beauty in some of the desert we have seen.  But some of it has been dusty and barren and doesn’t have a lot to offer (like trees).

We started are Arizona journey in Quartsite, a supposedly must stay place for any RVer.  Quartsite is a town in the middle of the desert with a population of about 4,000 people.  But in January of every year thousands and thousands of RVers come to Quartsite for a couple of weeks of flea markets, RV sales and just about anything else RVers would be interested in.  They can set up camp in the desert for a few dollars a night with the Bureau of Land Management (BLM).  We missed the big event by a week or so but there were still flea market stuff (or I should say junk) going on.  RVers can camp on BLM land all winter and there were hundreds of campers still parked in the desert.  Joe and I decided to stay at a regular RV park so we could have hook-ups and I was just a little tired of the dust and dirt of the desert (not that the RV Park was much different).  Quartsite was an interesting place but I saw enough for my lifetime.

From Quartsite we moved on to Buckeye and stayed at a nice RV park called Leaf Verde that was 90% snowbirds.  They had a great area set up for short term people like us and the whole park was paved so no dust.  Activities everyday that included a chili feed one night, pancake breakfast on Saturday, (which Joe went to), a dance, and a potluck.  We would definitely stay here again just because it was very clean, walking or biking distance to the city of Buckeye which had everything you would need and very friendly people.

From here we moved to a place we came to love, Lost Dutchman State Park in Apache Junction in the Sonoran Desert.   You have to have reservations at this park.  We had made reservations for 8 days but were able to extend our stay to 10 days.  Some sites have electric and water but we weren’t fortunate to get one of those sites.  We caught up with my brother Wayne and his wife Lois and my dad flew in from CA to spend time together.  This is a wonderful state park and I guess I could say staying here changed my mind about the desert.  We took several challenging hikes on the Siphon Draw Trail up Superstition Mountain in Tonto National Forest.  One day we made the most challenging hike from camp to the Basin, a little over 1,000 foot climb that was 2 miles long.  We sure could tell we were not in the best of shape and that we are getting old (older).  You could go another 1,000 feet to the top of the mountain but the climb was much steeper and we felt we had already pushed ourselves to our limit so we turned around but were proud we had made it as far as we had.  Every week they have to rescue someone or airlift an injured hiker off the mountain.  In fact a few days after we left while my dad and brother were still at the park they did a search, rescue, and airlift of a man from St. Paul, MN who didn’t live.  The mountains are rugged but the views were spectacular! 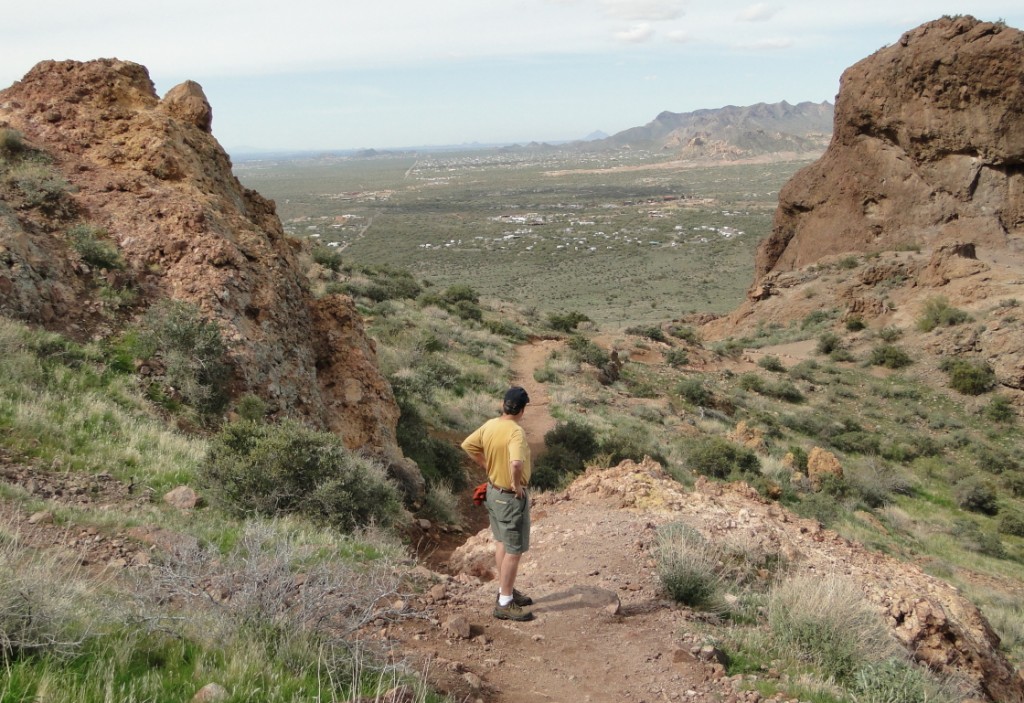 Around the park and flatter hiking trails was the giant Saguaro Cactus which is something to see. The ones with arms are over 75 years old and these cactus are protected.   There were many Cholla Cactus which were not a favorite of Ivy’s.   They drop balls of spikes about the size of a tennis ball which Ivy unfortunately stepped on.   The desert flowers that were blooming were gorgeous.   We saw and listened to so many birds such as the quails, which were so much fun to watch around the RV.  Every day we heard the coyotes howling so close to camp.  This was not the flat barren desert we had seen previously.  This was hilly and full of vegetation and more gravel and rock than dirt and dust.  I know we will be back to this area again. 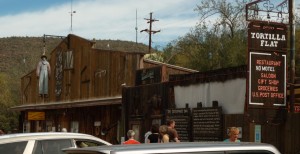 During our 10 day stay at Lost Dutchman we did some fun things with Wayne, Lois and my dad.  One day we drove up into an area of Tonto National Forest to Tortilla Flats, a bar/restaurant sitting in the mountains.  It was an interesting drive with switch backs on a very narrow road but worth the trip.  Again there was beautiful desert vegetation in the mountains. 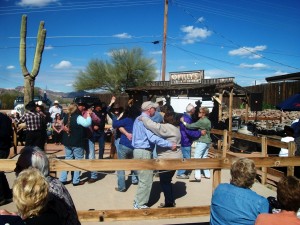 We went to a restaurant in Apache Junction called Filly’s that was known for its chicken wings but also on Sunday afternoon when we went they had a live country western band that played outside on the patio.  The place draws a very large crowd for wings and dancing but the best thing was watching the cowboys ride up on their horses and tie the horses to a long hitching rail.  We knew we were in the true west.  Of course, we tried our steps out on the dance floor and after dancing with my dad, I gave up and we left.  Great afternoon! 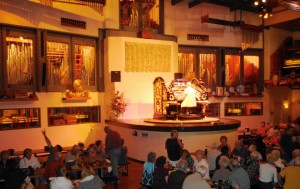 My brother also took us one evening to a place called the Organ Stop Pizza in Mesa.  Another place you had to get to early or forget about getting a spot.  Here after ordering pizza you found a table and watch a man playing a huge pipe organ rise out of the stage floor and put on a great show.  The hall was huge and around the outside walls and ceiling were other instruments that played with the help of the organist.  It was a one of a kind place and the pizza was excellent also.  There is not a shortage of things to do around the Apache Junction area since it is so close to Phoenix.

We were sad to leave Lost Dutchman but decided to stay around Apache Junction mostly because I was going to head back to Minnesota for a few days for our granddaughter Cate’s 1st birthday and it was a good area for Joe to hang out while he was by himself.

Oh yes, from the 80’s in Arizona to a snowstorm in Minnesota I flew back for our little princess Cate’s first birthday.  She is one beautiful little sweetheart and it was so special to be able to spend time with her.  I was able to celebrate her birthday and our oldest son Eric’s birthday (they share the same birthday 40 years apart) with Cassie and Aaron, and Amanda and Ron.  I truly felt lucky for having such a wonderful family but missed Joe back in Arizona.  We will both see the kids mid-April when we will be back in Minnesota for the summer.  Meanwhile we will enjoy the warm temperatures of Arizona.