We have been fortunate to find two Army Corps of Engineer Campgrounds.  One was outside of Nashville, TN and the other in Montgomery AL.  By far the Steven Points CG in Nashville had the best site we have ever stayed on.  Our site overlooked the lake and sat on about ¼ acre of land.  One morning I opened up the door and there sat a bald eagle in the tree.  Joe couldn’t get the camera fast enough to get a picture but it truly was beautiful.  Because we didn’t have reservations we could only stay there for two nights otherwise we would have stayed longer.  It is suppose to be the most used Corps of Engineer Park in TN.  We could understand why.  The Golden Age Pass is good at COE Parks so our cost was 50% off.  What a ridicules price of $12 a night for such a gorgeous site.  It felt like stealing.

While we were staying here we went to see The Hermitage, the Home and Plantation of President Andrew Jackson, our seventh president.  He purchased the 435 acres and built the Hermitage in 1804. Some of the slave cabins have been restored on the property.  The original wall paper in the mansion which was brought over from France still hangs on the walls.  The plantation has been a museum since Andrew Jackson died in 1845.  Both he and his wife, Rachel, are buried in the gardens on the grounds.  It was an interesting tour and made us aware of the wealth even back then of our politicians. 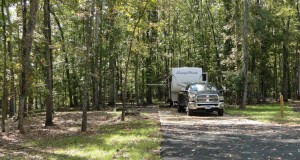 The second COE Park was outside of Montgomery, AL.  Again we had a beautiful site overlooking a creek that feed into the Alabama River.  There were two loops in the park and we were fortunate to be in the brand new loop that just had opened this year.  All sites had full hook-ups and the cost with our Golden Age pass was just $11 a night.  Again, what a deal!  We stayed here four nights which happened to be over a weekend and the CG was full Friday and Saturday night.   A lot of families come in over the weekend to enjoy the nice facilities but because the sites are so spaced it didn’t seem crowded.

We met some really nice Alabamians.  We had Bill with his dog Holly who stopped by a couple of times a day to sit and visit and give us information about Alabama.  We have an invitation to move to Mabelfield, AL because “we are such nice folks”.  I don’t think I’ve been called “mam” so many times. 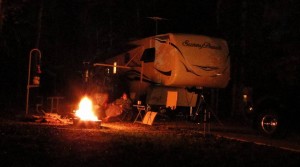 We also had a wonderful neighbor we called “the fire wood guy” because we neglected to ask him his name. In order to have a camp fire you had to scavenge wood on the ground in the woods.  We had picked up enough wood to have a small fire the first evening and were sitting by our fire when the man next to us came home from work and walked over by us.   Not sure what his story was but he was by himself in a small travel trailer and went to work every day from the CG.  He said we should take the wood he had stacked by his 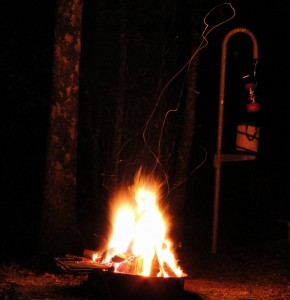 site because he could get more from someone he knew.  We asked him if he knew of a place to purchase fire wood and he said you just pick it up in the woods.  So the next day Joe spent a few hours going out and picking up wood in the surrounding woods so we could have a small fire.  We were just settling down with our new friend Bill when “the fire wood guy” came over.  Joe offered him a chair but he said no he had brought us some wood.  He backed up his truck and there he had a half truckload of wood.  He said a friend of his had a tree that came down so he just stopped after work and cut some of it up for us.  He wouldn’t take any money which made us feel really bad but we used up every last piece of wood he brought us and enjoyed every minute by the fire.   We left a note and a little money on his door when we took off saying that he would be one of those memorable  people we have met on our journey that we could tell about as ‘the fire wood guy’.

As we have driven passed the tobacco fields of Kentucky, over the rolling hills of Tennessee and by the cotton fields of Alabama, we again realize how lucky we are for this life road we are travelling.  We miss our little Cate very much but realize that time goes by so fast and we will see her soon and be able to give her lots of hugs and kisses and our kids too.

Hugs and kisses to our kids and especially Cate!