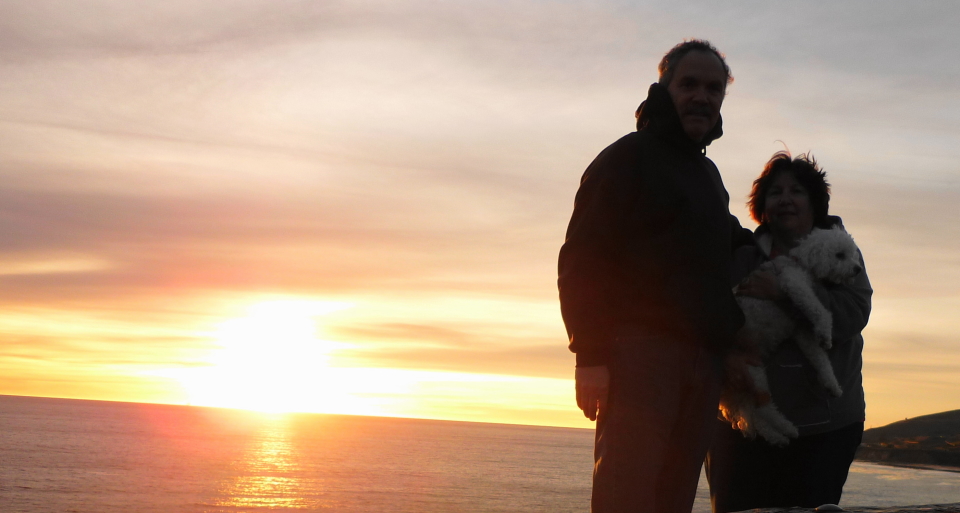 Seacliff State Park in Santa Cruz was our next stop.  Okay, here is one of my complaints about CA.  The state park system in CA is terrible.  It’s not that they don’t have nice state parks but they are so expensive for really nothing.  The sites are normally close together and short, not meant for RVs over 25 feet.  The least we paid was $35.00 a night and this was with no hook-ups. Seacliff, because it sat right on the beach, was $55.00 a night and there were no hook-ups plus we sat on black top with no space between us and our neighbor. Now it was our choice to stay here because we wanted the experience of staying right on the beach but $55 a night – really?  And we were told all the time that CA is broke so they aren’t going to get any better in fact some of the parks will be closing.

Seacliff was an experience in itself.  We did sit on the beach, on the blacktop with a walkway between us and the beach.  So we did enjoy the beach and watching the sunset but we mostly people watched as they walked about 5 feet away from the back of our 5th wheel on the walkway. It was an interesting place and I’m glad we stayed there once but it is not on our “must do again” list.  In fact it’s on our “we won’t go back there again” list.

Seacliff is also the home of a U.S. Naval Cement Tanker Ship.  Yes, a cement ship.  Towards the end of WWII the Navy built 3 cement ships because steel was hard to get.  Two of the ships were used for a short period of time and the 3rd one never was sent to sea.  When the war ended the ship was moved to a pier in Santa Cruz at Seacliff and was used for a few years in the late 40’s as a nightclub.  A winter storm split the ship in half and now it sits at the end of the pier for tourist to see that piece of history.

Monterey County Fairgrounds Campground in Monterey was our next home for four days.  Not a bad place.  We at least sat on grass and didn’t have close neighbors.  We decided to stay in the lower area which was grass – upper was on blacktop.  If they would have been busy we would have been crowded together.  Fortunately for us it wasn’t busy and we had an enjoyable stay with the golf course out our back window.  We spent a day exploring Monterey and our second day we went to Carmel.  We drove through the charming city and went to the Carmel County Beach where we could let Ivy walk on the beach without a leash.  The beach was right by Pebble Beach Golf Club so we could sneak a peak of the golfers and the homes if we climbed up a little hill.  From there we went to the Carmel Mission founded in 1770 by the Franciscan Friar Junipero Serra.   The church was breathtakingly beautiful as well as the other buildings and the grounds.  It really felt like a holy place and I’m not a real religious person.  It was one of my highlights of places to visit. 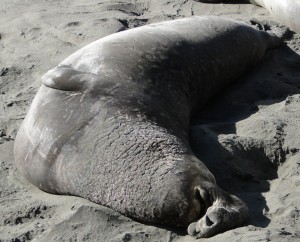 We were to meet up with our friends Sue and Virgil for a few days of camping at San Simeon State Park along the coast so off we went.    As it turned out Virgil was having some reoccurring back problems and didn’t want to make the drive so Sue drove their pick-up camper to meet us by herself.  We had such a good time.  Sue is so familiar with the area so she acted as a tour guide for us.  The first day we spent four hours on a beach watching hundreds of Elephant Seals.  This was an experience we are not soon to forget.  The female elephant seals come to the area every winter to give birth to their pups in Dec and Jan.  They stay with their pups for four weeks, mate and then head to Alaska leaving the pups.  The huge male seals, weighing up to 5,000 lbs., come earlier to the beach to fight for the right to mate with females.  It was amazing watching the bull seals fight with one another.  They would raise themselves up and it seemed whichever bull could raise himself higher was the winner.  Sometimes they would fight by taking bites out of each other.  The loser would run for the sea.  It is something to watch them move that huge body of blubber so fast.  The young pups stay on the beach for another couple of months learning how to swim.  At four months they leave the beach for the swim to Alaska.  It was a blistery day standing on the walkway watching the fighting, listening to the squawking the pups make when they can’t find their mom, and listening to the unusual sounds the big bulls make when another bull gets too close to their lady friend.   We were chilled to the bone when we got back to our 5thwheel that evening but it was well worth it. 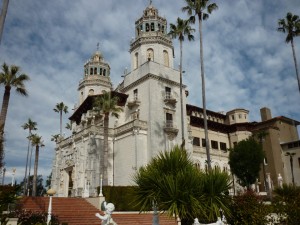 The next day Joe and I went to Hearst Castle.  That was a totally different experience.  If you haven’t heard of it, which I hadn’t, I’d recommend googling it.  It was so unreal the money and time William Randolph Hearst put into this castle.  He started building it in 1919 and quit 26 years later when he said it was about half done.   The main castle is 95,000 square feet – just can’t imagine what else he needed to make it complete.  I could go on and on about it but would never be able to describe it the way your eyes would see it.  One of the things that impressed both of us was the two pools, Neptune and the Roman Pool.  The Neptune pool was outside and was amazingly beautiful.  The Roman Pool was inside and every tile in the pool was inlayed with gold.  Both were stunning.  This was definitely a place for the movie stars.    It was worth the time and money to have a look at how this wealthy man lived.  It was $25 a person for each tour and there were 5 different tours you could take.  We decided to just take one and that is really all we needed.  We were allowed to walk around the outside gardens and buildings after the tour.

Our next stop was at El Capitan State Park, Goleta, CA.  Sue moved with us but left after only one day because she was meeting other friends in San Diego.  We had a spectacular 5 days with her and hope to catch up with her and Virgil again on the road.  On our way to El Capitan we had to stop at Anderson’s Restaurant in Buellton for their famous split pea soup that our brother-in-law, John, had told us about.  This was soup well worth stopping for.

El Capitan was a lovely state park. We had a nice wooded site which made us feel like we were back in MN.  The park sat on the bluffs overlooking the ocean.  We enjoyed several nice walks on the beach but unlike Oregon, California’s state parks do not allow dogs on the beach.  So any walk on the beach had to be without our Ivy. 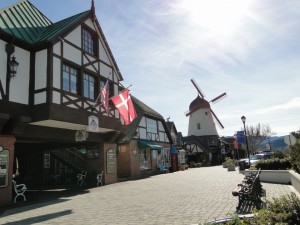 One beautiful day we drove into the most charming Dutch town called Solvang in the Santa Ynez Valley.  A beautiful area and the town was so much fun walking around in.  If you were into wine tasting you had many choices of wine tasting shops.  Many small specialty shops with unique items and of course many restaurants.  But one of the things they advertise is the Dutch bakeries which there were several of.  We checked out a couple of bakeries and ended up taking just two bakery items back with us.  We opted for lunch at an authentic Danish restaurant called “Viking Garden Restaurant”.  Okay, so how did these Minnesotans end up in a restaurant that had Viking in its name?   Red cabbage, sauerkraut, kielbasa, potato pancakes – what more can I say.  Yummy!  It was a fun day that ended with a visit to the chocolate shop.  Double yummy!