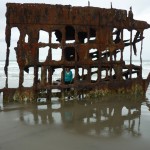 Our first stop on the Pacific Coast was Fort Stevens State Park, another one of Oregon’s 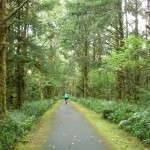 beautiful state parks. This park is Oregon’s largest state park with almost 500 sites.We were so excited about getting a nice shaded site not thinking that we weren’t in Minnesota in the middle of summer.Our site was very nice but very dark and very, very damp because it was so shaded.We felt we were in the middle of a rain forest.Of course, it didn’t help that it rained a little every day of the four days we were there.Even with the on and off rain we got in many walks on the beach,biking on the wonderful bike trails this park had, toured the very interesting Fort Stevens and went to the farmers market in Astoria.  Joe also was able to drive his big Dodge truck on the beach.That was fun! 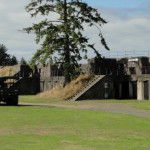 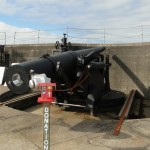 Fort Stevens was originally built during the civil war as a small fort protecting the mouth of the Columbia River. During World War II it was updated and expanded to protect us from Japan.A little piece of history that we didn’t know, the main land of the U.S. was attached by a Japanese submarine one time on the Pacific Coast very close to Fort Stevens.Very few rounds of shells were fired by the submarine and the U.S. didn’t even fire back.  The fort didn’t stay open very long after the war ended and what remains is now part of the state park. 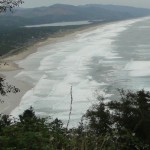 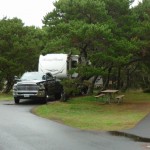 Our next stop was at Nehalem Bay State Park just 50 miles down the coast from Fort Stevens. This was a  smaller park with only 265 sites.One of the nice things with Oregon’s state parks is that the sites are spaced nicely.We never felt we were sitting on top of our neighbor.This park also was right on the ocean with a nice biking trail.We also took advantage of being only 3 miles out of the town of Manzanita and rode our bikes in for lunch one day. 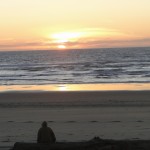 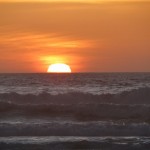 Our original plan was to stay at this park for 3 nights but ended up staying 7 because it was such a nice park and we loved the beach. You could walk miles and miles on the beach and here is where we saw our first fabulous sunset.It took until the 6th night before we didn’t have clouds in the evening but that sunset was so worth the wait.Nothing like walking on the beach watching the sun set with your wonderful husband of 41 years. 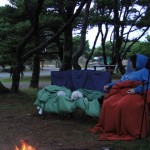 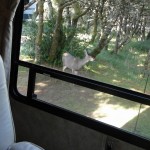 During our stay at Nehalem Bay we had daily visitors, four deer. We looked forward to them every day and took way to many pictures.They became part of the family.  We also saw a herd of Elk one evening right on the outskirts of the park. 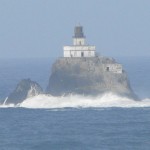 It seemed every day we took little road trips to a different beach or beach town. Oregon’s coast belongs to the people so the state of Oregon has many day State Parks.Each beach or state park has something different to offer as far as beauty.Some are sandy and easy accessible while others you view the ocean from cliffs or climb down hills to get to the beach.Everyone we stopped at we loved. At Ecola State Day Park we saw our first lighthouse, Tillamook Rock Lighthouse.This lighthouse sits out in the ocean so look, take pictures, but can’t visit.There are eleven lighthouses on the Oregon Coast and we hope to see them all.

We also visited the town of Cannon Beach, 20 miles from Nehalem Bay.Actually we visited Cannon Beach three days.Cannon Beach is a very cute seaside community that was full of touristy stores.The first day was the day we just came in to walk around the town and have Joe’s pizza.As we were walking around we saw a pet store that had a Thunder Jacket in the window.We decided to look at it for high anxiety dog, Ivy.The owner thought we should bring Ivy in for a fitting.So day two we just went back for the Thunder Jacket fitting and bought the jacket.As we were leaving the store I spotted a hair salon.I needed a cut so bad so checked out if they had an opening. Not until the next day.So day three was my fault – but it sure was a fun town to walk around in and Joe got his pizza, I got a much needed haircut, and Ivy got a Thunder Jacket (I’ll keep you posted if it works).

Another day we drove to Tillamook, a larger seaside city but we went for one reason. They have a huge cheese and ice cream factory and of course you could tour and sample.The tour was interesting, the cheese tasting was okay (neither of us are big cheese people) but the ice cream was so good.The stores in this area sell Tillamook Ice Cream so we try to stay away from that goodie. 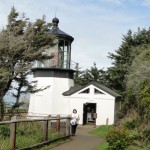 A little past the city of Tillamook we took a scenic ocean drive, not a road to take the 5th wheel on, to go to our second lighthouse, Cape Mears Lighthouse.This was a very small lighthouse but a beautiful lookout.We also visited the Octopus Tree.It is a 300 year old cedar with no distinctive trunk but eight huge branches coming out of it.It was a little climb to go see it but worth the time.

One of the things that we noticed at Nehalem Bay Park was all the crabbers. So many people had crab nets or cages and went out crabbing every day.We watched a young couple camped close to us come in with a lot of crabs, put two huge pots on burners outside and cook and clean the crabs.We figured they either sold the crabmeat or canned or froze it.They were just one of so many that did that every day.

It was hard to leave our site at Nehalem Bay State Park. It is on our list of places we would go back to.Off we go a little farther south down the coast! 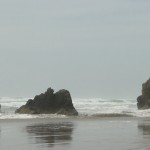 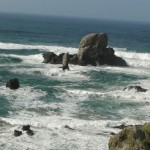 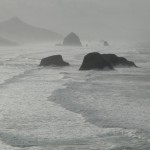