As I mentioned in my last post we had stayed at Catalina State Park in Tucson.  While we were there we met a very nice couple from Salt Lake City, Utah, John and Jeanne, who had the site right next to us.   They are considering going full-time and already travel about nine months out of the year.  They are talking about selling their home in Utah and have been looking at a new/used 5th wheel.  We were excited for them and gave them some information that helped us when we first started off.  We always love to share what we know about full-timing to others since that is how we found out so much.  We were always asking questions to anyone that wanted to talk about full-timing.  We told them that we were heading to Benson, AZ to Kartchner Caverns State Park and they happen to be heading there also  a few days behind us.  We told them we hoped to see them there and off we went.

We settled into our spot at Kartchner’s and two days later here pulled John and Jeanne right across from us.  What a great surprise!  I think we have them talked into going full-time.  We sure had a great visit and know we will stay in touch.  Buy that Cameo, John and Jeanne!  See you on the trails! 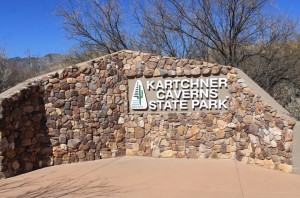 Kartchner Cavern State Park was another Arizona park sitting in the foothills.  They provided tours of the caverns daily but unfortunately they were booked for the days we were at the park.  It was spring break in the area so they were rather busy.  We were okay with not making it into a tour because it was a little expensive and we’ve been in caves before but after we watched a 15 minute video of the caves we wished we had been able to take a tour.  The caves looked magnificent.  We marked it down for next time we are in this area.

We did get in a 3 mile strenuous hike in the foothills.  It took us a little over 2 hours and I came back sunburned.  It was so nice when we headed out but I forgot how hot the Arizona sun gets.  Lesson learned.  I’m way to old to get sunburned.

we can say we saw it but not impressed.  We thought we would see gunfights on Main Street but all gunfights were behind fences and you had to pay to watch which we decided to pass on.    We even had to pay to see the Boot Hill Cemetery which was about worth the $3 we paid to get in.    I don’t think either Joe or I are into the western scene which probably would have made us appreciate it a little more.  We did have an excellent lunch at the Crystal Palace, an old saloon.  It is to bad that this old western town had to become such a tourist trap in order to preserve it.  Glad we went to check out the town but not on our list of must return.

When we drove back the 20 miles from Tombstone to the state park we had to go through a Border Patrol checkpoint.  We thought we were a long distance from the Mexican border but I guess even at this distance they must be checking for something.  They really seemed to have a lot of people working there and so much equipment from cars, trucks, ATVs, spot-lights, video cameras set-up.  But they moved you through very fast.  The patrol guy smiled at us and told us to have a nice day.  I guess we didn’t look like – whatever they were looking for.

So we have to start heading northeast to slowly make our way to Ohio.  We can tell as we start off going more north that the days aren’t as warm and the nights are getting quiet chilly.  Joe and I are both getting anxious about seeing our kids.  It seems the closer you get in distance from them the more you miss them.  Thankfully at our age time goes by so fast and before we know it I’ll be hugging Alex and Cate.