Remember how I said snow was being predicted in the high country in AZ?  Well did we get the snow but I’ll come back to that later.

We moved from Lake Havasu City to the town of Williams, 67 miles south of the Grand Canyon.  This northern Arizona town sits at 7,000 ft elevation and Route 66 runs through its main street.  We found a nice RV park, Grand Canyon Railway RV Park that was a few blocks off main street and stayed put for one week.    The Grand Canyon Railway runs out of Williams.  This is a train that runs every day of the year except Christmas from Williams to the South Rim of the Grand Canyon.  We decided this was the way we were going to make our first trip to the Grand Canyon.  The RV Park had a wonderful Pet Resort that we put Ivy in for the day and off we went to the Canyon.  The train leaves the station at 9:30 after a short cowboy shoot-out in the parking lot.  The ride one way is about 2 ½ hrs long with a tour guide in each car that points out interesting things on the way and we were entertained by a very old cowboy playing his guitar and singing.  Thankfully this cowboy had to entertain all the other cars so he “sang” for about 15 very long minutes and moved to the next car.  Once we arrived at the South Rim we were free to do some hiking before we had to catch our train for the return ride.  If you miss that train you are out of luck.  One train south and one train north and it wasn’t an inexpensive ride so you better make sure you are at the depot to go back or you will have to find lodging for the night.

We hiked close to 3 hours which doesn’t seem long but at that elevation we were so tired and ready for our train ride back.  Plus we didn’t bring a lunch and decided not to spend our time at the Rim eating but enjoying the beautiful 70 degree weather and the views.   We couldn’t wait to sit on the 2 ½ hr train ride back. 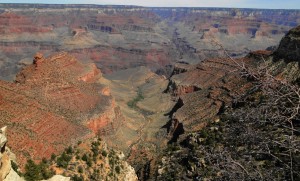 This was our first time at the Grand Canyon and really looked forward to enjoying the beauty.  Our tour guide on the train said that no matter how many times she sees the Grand Canyon it brings tears to her eyes for its sheer beauty.    Please don’t take this wrong because the Grand Canyon is truly a wonder and it is beautiful BUT ——-.  Joe and I have been so very lucky by having the ability to see so much beauty these last months.  How do you say that the rugged Pacific coast of Oregon isn’t just as beautiful?  Or sitting along Prune Creek in the Big Horn Mountains of Wyoming watching the momma moose and her calf be less beautiful than the Grand Canyon.  So I guess what brings tears to your eyes is in the eye of the beholder and both Joe and I would have to say we have seen some breathtaking sites that could have brought tears to our eyes.    A little fact we didn’t know about the Grand Canyon National Park – when you go to the Grand Canyon only 8% of it is owned by the Federal Government.  The other 92% is owned by three Native American tribes.    You only see such a small portion of a huge hole in the ground.  We were blessed to be given the privilege to see this wonder but we know we have already seen a lot and hope to see a lot more of this country.

Our train trip back to Williams was an interesting ride.  We had the same tour guide who gave us much history about the railway system and surrounding area.  We again were entertained by a singing cowboy but this time this older cowboy had a great voice and was funny.  It was hard to see him move on to the next car.  We were surprised by a train robbery by three cowboys riding their horses alongside the train and then boarding the train with their faces covered and guns drawn.  Soon a U.S. Marshall came aboard and we were in the middle of a train robbery.  Fun stuff!  But we had an unexpected little piece of entertainment.  As the train was moving 30 miles an hour down the tracks, two men were running alongside the train naked.  Yes we were being streaked. We were in the middle of nowhere and here they were.  Even the tour guide said it was a first.  It gave everyone on the train something to talk about.

By the time we got back to Williams we were starved.  We picked up Ivy, feed her, and walked over to the Grand Canyon Depot Café for the dinner buffet.  I don’t think I’ve done this on the blog yet but if you are ever in Williams please do not eat at this place.  The food was terrible and it was expensive for what it was.  That is what we get for skipping lunch. 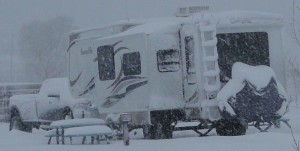 Okay here we go with the snow.  We knew that snow was being predicted for the area and decided we would just stay put.  After all, how bad could it be?   It started sleeting late Saturday afternoon and by evening it had turned to snow.  By Sunday morning we had about 12 inches of snow on the ground.  It snowed lightly on and off all day Sunday and by Sunday evening it started snowing a little harder.  By Monday morning we had around 18 inches of snow on the ground.  The temperature had also dropped from Friday’s 70 degree temperature to 19.  We did

discover that our 5th wheel worked darn well in the cold weather.  By Monday afternoon the sun was trying to come out and we walked around the cute town of Williams.  Tuesday the sky was blue and the snow started to melt with the 40 degrees temp so we decided to take a drive to the Kaipap National Forest outside of Williams.   We enjoyed a little walk in the snow and the Ponderosa Pines around a lake where we watched Grey Herons and ducks in the water. Wednesday it was 65 and off we went on a day trip to Sedona and Jerome.  We decided it worked so well putting Ivy in the Pet Resort once we’d put her there for our day trip to Sedona. 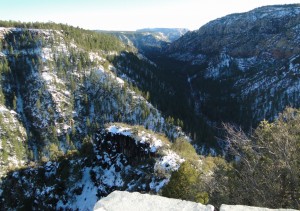 Williams is about 30 miles from Flagstaff and then another 26 mile drive through Oak Creek Canyon in the Coconino National Forest to get to Sedona.  This is a spectacular drive through Ponderosa Forests, Red Rock formations and just absolute beauty.  When we got to Sedona is was so busy we decided to just stop at the tourist center to get some hiking information and forgo the actual town of Sedona.  We decided on going to Palatki Heritage Site about 30 minutes from Sedona to see the cliff dwellings.  We had a very rough ride on a 7 mile gravel road to get to the site but it was worth the bumps to see the cliff dwellings that were thought to be occupied between AD 1100 to 1300 and to see the area’s largest panels of rock art.  We spent about 2 hours climbing around on rocks and listening to the history of the different native cultures who occupied that area so very long ago.  Loved the history of the Red Rock dwellers in this area. 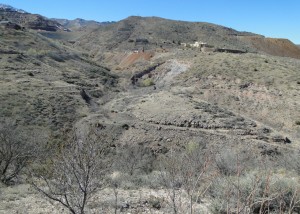 From here we drove another 20 miles to the mining town of Jerome in the Central Arizona Mountains.  This was an old cooper mining town built right in the side of the mountain.  At Jerome’s peak about 15,000 people resided in the town.  At its low about 50 people lived there.  Today about 500 people reside in this town but it is full of art galleries and other unique shops and lots of tourists.  We had a wonderful Mexican lunch at the Quince Grill & Cantina on main street.   It is a must go place if you ever get to Jerome.  After lunch we visited a few shops but decided we had about 90 miles to drive back to Williams and we had to get Ivy before they closed the doors and she wouldn’t have liked it if we left her there overnight.  So we took off for the drive back knowing we wanted to stop in the Oak Creek Canyon for pictures.   We had a lovely drive back, stopped many times for pictures and even stopped for a couple of short hikes alone some canyon rims.  We definitely want to go back to this area and spend some time exploring in the Red Rocks.

Off we go to New Mexico and our slow trip back North so we can go wedding dress shopping in Minnesota mid-April.