We stayed at a private RV park in Fort Stockton that was ok.  They had a nice little restaurant on the grounds that Joe ate a good breakfast at one morning.  The restaurant was only open for breakfast and dinner and we thought that strange but after we were there a few days we saw why they did that.  They also had a very nice dog park that Lily loved and if you felt like it you could take a dip in their pool.  Tom, the ground maintenance guy became Joe’s best friend.  If Joe was outside, Tom was visiting.  Tom was 77 years old and he and his wife work-camped at the park.  We stayed five nights in this park.  Half of the park sites were full of workers and their families.  The park was set up nice because they put all the workers on the outside perimeter and all the short term people like us in the center.  Every day we watched as the park filled completely up by 5:30 or 6:00 and those people left by 10:00 the next morning.  Every day we saw campers come into the park, set-up and then go to the restaurant for dinner or in the morning they had breakfast at the restaurant before heading out.  Great idea and money maker!

The day before we left we drove into town to fill up on gas and make a stop at Walmart for a few groceries.  As we drove into the Walmart parking lot a very nicely dressed woman and a child about three was stand with a sign asking for help.  We didn’t think much of it because we do see so many panhandlers.  The odd thing about it was how nicely she was dressed.  We went in the store and did our grocery shopping and then headed to the Walmart gas station.  There was a car sitting in the diesel lane so Joe had to back in behind the car to get to the pump.   People were sitting in the car but no one was pumping gas.  As Joe started to pump his gas the man got out of the car and approached Joe with a gas can.  He told Joe that they were from California and had a family emergency in Texas.  They were on their way back to CA and ran out of money.  They had three small children and spent the last of their money for a room to sleep in.  He asked Joe if he would just fill up the gas can so they had a little gas.  This was the woman we saw standing at the entrance to the Walmart parking lot.  They didn’t ask for money or anything else except to fill that gas can.  Joe filled their car tank with gas which was empty.  They were so appreciative.  As we drove off we thought why we didn’t do more for them.  So Joe turned around to see if we could buy them lunch but they were already gone.  We always say we are so blessed we need to share our blessings. 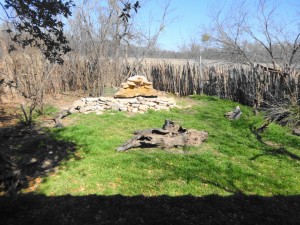 Our next stop was at South Llano River State Park in Junction, TX.  Nice Park with excellent hiking/biking trails.  For the next five days we took a different trail either hiking or riding our bikes.    They also had four bird blinds that we enjoyed sitting at and watching the birds and taking pictures.  We saw birds that we have never seen before such as the Spotted Towhee which looks a lot like a robin and Scrub-Jays which are beautiful, and many birds that we have seen before but still love to watch.

And talking about our love for bird watching, we had quite an experience
with my favorite bird, a cardinal.  When we arrived on Sunday our site sat with trees around it.  In fact we had a hard time backing into the site without scratching the sides of the RV.  As we settled in a male cardinal came to the back window and sat on either the bikes or the ladder.
I was taking pictures out the back window thinking this was such a cool thing.  Monday all day the cardinal would sit on the ladder and seem to be watching us.  It was nice to be up close and watch the beautiful bird.  By Tuesday it started to fly up against the window and peck on it.  It was a constant thud as it flew against the window.  Lily would no longer sit in her bed by the window and tried hiding in the closet.  By Wednesday it was driving us

crazy so we hung a sheet outside to cover the window.  All the bird did was move to another window.  We got creative and made strings that hung down using my yarn.  Our RV looked quite decorative from outside.  We had people stop and comment.  Our neighbors watched the cardinal move from one window to the next.  By Thursday the bird was waking us up at 7 in the morning with its flying against the window and stopped when it got dark.  Joe had a water hose hooked up and would spray it but it just kept coming back.  Why didn’t we move sites?  Very good question!  We were happy to pack-up and leave that cardinal behind on Friday.  They are still my favorite bird because they remind me of my mom but for now I think both Joe and I need a little break from seeing or hearing a cardinal.

On to Fredericksburg, TX, a touristy German community.   Can’t wait to eat a little sausage and sauerkraut!

Sometimes things happen in your life that make everything else seem so unimportant.  Joe and I have been blessed as I have said many times but when our children are hurting, we hurt.  We ask our family and friends to remember our daughter Amanda and her husband Ron in your prayers when they are needing it the most.  Bless you!

Stay safe!  Love to all especially Amanda and Ron!