We ended up staying in the Dallas area until January 12th.  The weather was rainy and a little chilly and we weren’t in any hurry to put things away or set-up in the rain.  Our goal was to head south to the Gulf with a few stops on the way.  Our first stop was at a Corp of Engineer Park in Georgetown.  Jim Hogg COE Park was great.  We had a site overlooking Lake Georgetown and it was very quiet until the weekend.  The park filled up with families for the weekend even though the temperatures were a little on the chilly side.  Kids don’t seem to care as long as they can be outside playing.  By using Trip Advisor we found a fantastic Tex Mex restaurant called Dos Salas.  Yummy food!  I love checking out local restaurants and this was one of our better finds.

Our next stop was San Antonio KOA.  We are not big fans of staying in KOA parks because the sites are usually packed together and they are expensive but sometimes they are the best choice for an area we want to visit.  This was the case with the San Antonio KOA.  It was better than most with sites a little farther apart.  It also had a very nice bike trail that ran on the edge of the park which Joe and I loved.  We could walk Lily on it and also were able to take some nice long bike rides.  There was a little creek that ran along the bike trail across from our site and one night we got a heavy rain and when we got up in the morning the creek had flooded across the biking trail and a little close to the campground for our comfort.  The park made a few campers move and Joe asked if we should move and they told us they would watch the water and let us know.  By the next day the water was back to normal.  A little excitement!

The other reason to stay at this park (beside the reviews were good and not good on other parks in the city) was the city bus stopped right outside the gate and we could take a 15 minute ride for $1.20 to downtown San Antonia to walk the River Walk.  The bus was a great convenience and easy to use and on both the trip in and the trip back we were asked by people on the bus if we needed help figuring out the stops.  You might wonder why they would just ask us.  It could be that we were the only Caucasian people on the bus.  We kind of stood out like a sore thumb. 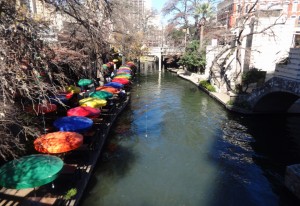 The River Walk is a 15 mile walk that loops through downtown San Antonio.  The San Antonia River runs through downtown and back in 1929 when the city repeatedly was flooded they talked about concreting the top over the river so the river ran under the city.  Instead, someone came up with the idea of digging down one level below street level and creating the River Walk with restaurants, galleries and stores.  They started in 1932 but it really didn’t take off until the 1970’s.  Now it is thriving.  It some areas there are so many restaurants you would have a hard time picking one.  It is heavily patrolled by police walking so you feel very safe.  There are tour boats that run down the water constantly.  The greenery, waterfalls and art is spectacular.  After again using Trip Advisor, we had a wonderful lunch at the County Line.  We sat overlooking the water and enjoyed a wonderful BBQ lunch and watching the boats as they went by.  We walked many miles but couldn’t possibly cover the entire walk.  On street level  we visited The Alamo which is right downtown which surprised us.  It is one of five missions in San Antonio and the only one that is not run by the national park service.  Besides the history behind The Alamo it really was not much to see compared to the other four missions. 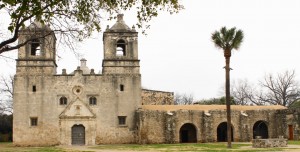 The next day we drove a few miles out of the city to visit the San Antonio Missions.  The four missions are within just a few miles of each other and they are all still active churches with services every Sunday.  Each one was unique and beautiful in its own way.  Our first stop was mission of Nuestra Senora de la Purisima Concepcion.  The mission was built in 1731 and with much restoration it is beautiful inside the chapel.  They restored some of the original paintings on the walls inside of the chapel.  Although it was a little hard to see it was still breathtaking just realizing how long ago it was painted.  This was my favorite inside chapel of the missions.  Somehow when you step in these chapels (and this one I really felt it) you feel like you are on sacred grounds.  It brings tears to my eyes.

The second stop was at mission San Jose y San Miguel de Aguayo.  Mission San Jose was built in 1720.   Again the restoration is amazing.  This was my favorite outside mission.  The sculptures on the outside of the entry were amazing.  As we walked the grounds we talked about the raids on the missions by the Comanches and Apaches and how many people lost their lives on these grounds.  Such an amazing part of our history.

Mission San Juan Capistrano was the third stop.  This mission was built in 1731 and the most restored of the four and also my least favorite.  It didn’t have the character the other missions had but still was enjoyable to visit.

Our last stop was San Francisco de los Tejas the oldest of the missions founded in 1690.  It was the smallest of the missions.  I loved the bell tower on this chapel.  A section of the mission attached to the chapel had been totally restored for the priest who is currently living there.  The unique thing on this mission was the Espada Aqueduct system that was completed in 1745.  It was a system of irrigation for the farm fields that was built by the mission Indians to move water from the river to their crops.  It is an amazing system considering there were no engineers to design it.  So much history to absorb in just one day.

From there we drove back to downtown San Antonia to visit the King William neighborhood.  This neighborhood was developed in the 1840’s and is several blocks of restored beautiful mansion.  The homes were beautiful but not the same as Charleston, SC.  After our walk we had a very late lunch at the Guenther House located at a flour mill that was built in the 1800’s and is still running.  This was another one of our great lunches.  We then had to walk off our lunch by taking another walk on a different section of the River Walk.   We had a great stay in San Antonia and saw a lot but it was time to move to the Gulf and get some real sunshine.

South Padre Island KOA was our next stop.  Of all the KOAs we have stayed in this would be our least favorite for two reasons; the spacing of sites was horrible and it was terribly expensive.  But after reading the reviews of other campgrounds in the area we decided to bite the bullet and stay.  After we were there a few days we checked out the county park campground right next door (which didn’t get very good reviews) and decided it would have been a better choice.  If we come back to this area we would definitely stay at Blanco County Park instead of the KOA.  We could always camp right on the beach like a few other campers did but with our size we might have to worry about floating out with high tide.

Not sure what to say about South Padre other than you have the beaches on the Gulf, the weather has been very nice (although we have been told that it has been cold), I can eat fresh seafood, and we have done some birding. We also climbed to the top of Port Isabel Lighthouse to see some great views of the bay and saw an off-shore oil drilling platform very close that had been brought in for winter storage.   Not sure if we would come back here but we always say “don’t say never”.

As always we have met some great people along the way.  We met a couple who are really from South Dakota who want to go full-timing so we loved sharing things with them.  We always say it is such a small world and this couple again proved that fact.  They have a son who bought a house five years ago in Jordan, MN and stayed at Dakotah Meadows in November while visiting their son.  We knew exactly where their son lives and shared stories about Dakotah Meadows.  It truly is a small world.

Off we go tomorrow to a state park in the Corpus Christi area.  We both can’t wait to get a little space between us and our neighbor and do some hiking on nature trails although rain is in the forecast.  We won’t complain about the rain if we can get out for our walks.

Stay safe!  Enjoy every day since we don’t know what tomorrow brings.  Love you kids, Cate and Alex!